Samsung  and Motorola aren’t  the only companies taking aim at the iPhone in their ads. Recently, Sony released a television ad for PSP in which a guy tries to show that the gaming experience of PSP is way better and cooler than of a Smartphone. The smartphone that was shown in the ad was just like iPhone 4. 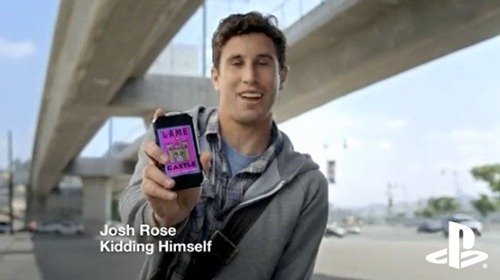 In the ad, the guy that was using and praising PSP also touts that in PSP you can buy some great games for only $9.99 which gives high gaming entertainment and they are way better than of Smartphone. Overall the ad was funny and I liked the way the guy said that the smartphone isn’t for playing big boy games, it is for texting your grandma and calling your girlfriend.

If you compare the gaming experience between iPhone and PSP than definitely PSP would be the winner but I don’t think these devices can be compared as iPhone is not only for gaming and on the other hand, PSP is just made for that. PSP itself faces a tough competition with Nintendo DSI which is also a great little gaming device so may be comparing it with Nintendo DSI would have been a sensible idea. And talking about iPhone gaming, we can easily say that its gaming experience is currently the best in the smartphone world.