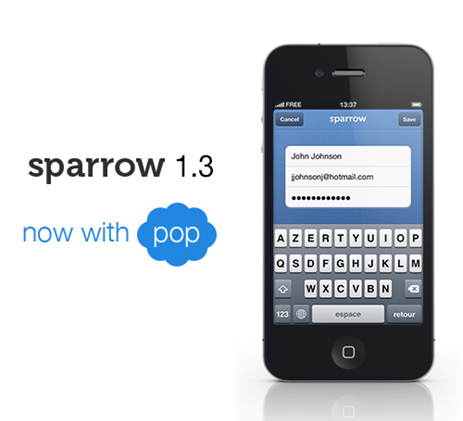 Sparrow for iPhone, formerly just a Mac OS X app, was launched a few months ago as a Gmail client. Recently, version 1.6 of the desktop app was released with support for POP accounts which meant that Hotmail and the likes would work with Sparrow. The same feature has just been added to the iPhone app as well so the list of compatible email services now looks something like below:

Apart from this, there’s not much new apart from mandatory bug fixes. Folder mapping issues have been addressed in this update.

Despite support for an increased number of email services ( virtually all of them since Sparrow supports both IMAP and POP accounts ), push notifications are still not supported which means that here at iThinkDiff, Sparrow is still not our primary choice of a go to email app. Sparrow would provide push notification support in a future update but let us hope that it’s free and not a paid feature. Another issue is not having the app already updated with the latest email every time it’s opened, like how Mail.app works – something we doubt we would be able to see in the near future due to iOS restrictions.