An image posted by Tinhte showing what looks to be a new version of iOS on a beta device.  From the look of it, the home button is now capacitive, and no longer a push button.  There appears to be a new sensor over the speaker at the top, possible the proximity sensor.  The GUI of the OS itself looks much different.  There is a Search iPhone box at the top, possibly the new spotlight feature for iOS (Spotlight is the best feature of Mac OS).  What is shown here is the new multitasking screen showing screenshots of the applications, and not just the apps icon.  You can still manipulate the icons the same way, clicking on it expands the window, and holding down will bring up the “X” to close the window. 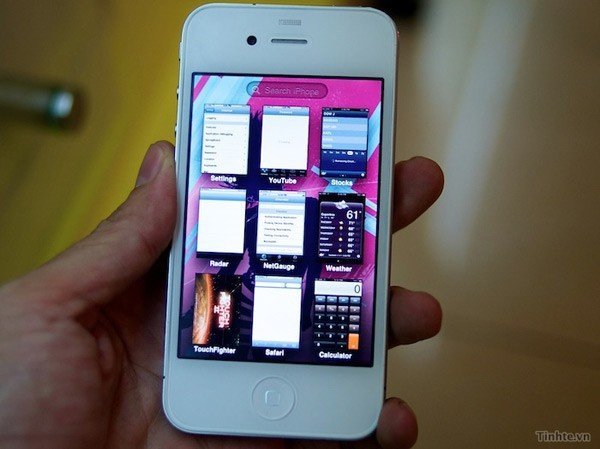 It was recently discovered that this version is actually an early version of iOS 4, not iOS5.  However, this may be the direction Apple is heading with iOS 5.  The larger multitasking icons, the capacitive home button, and the upgraded spotlight search.  It would not surprise me if this was what Apple had in mind for iOS 5, with the improvements they are making to MacOS, and how they are starting to make all there OS’s looking similar, this would definitely be a step in the right direction.