Apple CEO Tim Cook has been questioned by democratic senators on the privacy and security of users in regards to Apple’s COVID-19 app and website.

The app and website are screening tools for U.S. citizens and allow them to check their symptoms through a series of questions and get CDC approved recommendation based on their responses. As per Apple’s official announcement, the screening tools are developed after the approval of, and in collaboration with, the White House Coronavirus Task Force, Federal Emergency Management Agency (FEMA) and Centers for Disease Control and Prevention (CDC).

The senators, wanting to ensure user’s protection, sent a letter to Cook seeking explanation on data sharing policies and other safeguards. In a copy of the letter obtained by Bloomberg, Senators Richard Blumenthal, Corry Booker, Bob Menendez and Kamala Harris have questioned Apple if the COVID-19 app is in compliance with the HIPAA (Health Insurance PRotablity and Accountability Act). Cook was also asked to disclose the terms of agreement between the company and collaborating federal or state agencies as a concern “for the safety and security of Americans’ private health data.” 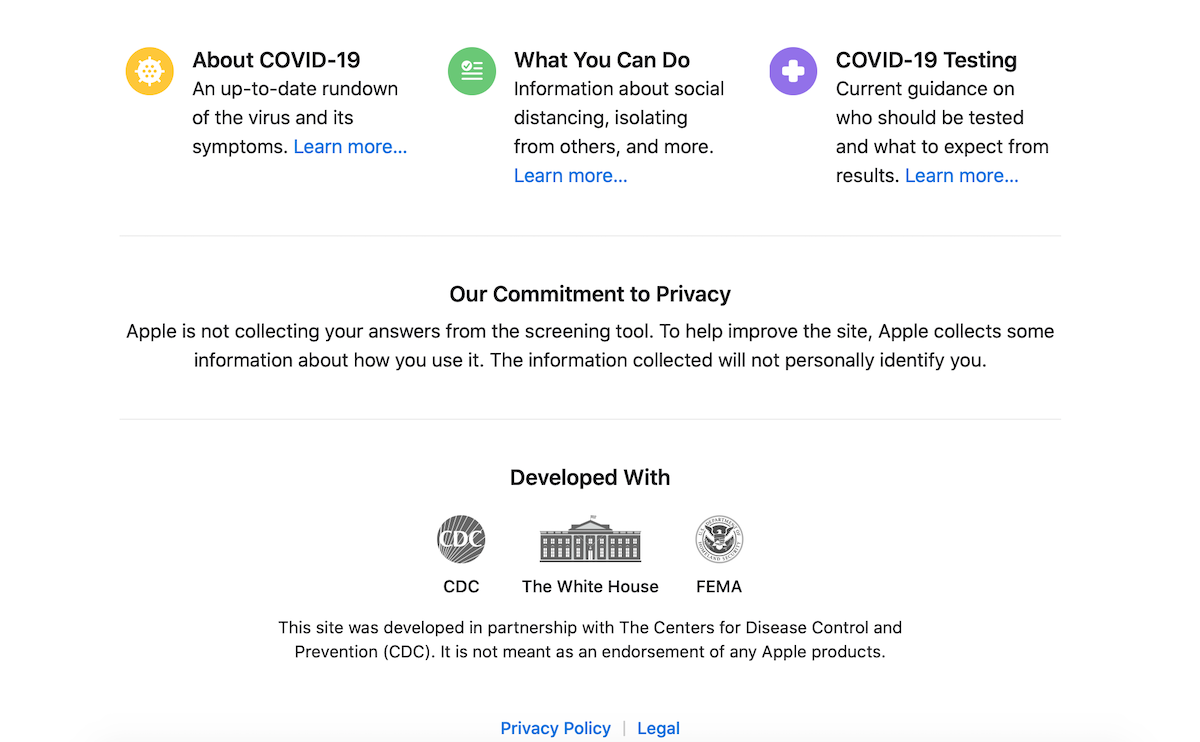 We are waiting for Cook’s response to the letter, but to answer some of the concerns ourselves, Apple has ensured privacy of users data by saying that they will be not be personally identifiable from the data from the COVID-19 app and website. Furthermore, users are not asked to sign-in, either by making an account, or via their Apple IDs.

It is not unusual for companies to be summoned by the government to answer questions regarding users privacy and security. Recently, Zoom was questioned by the Congress and Senate over incidents of major breach of privacy, security and safety on its platform. Previously, Mark Zuckerberg was also under government scrutiny over collecting user data on Facebook.

However, this letter to Apple is a little unsettling because Google is not being questioned on its recently published COVID-19 Community Mobility Reports, compiled on user’s location history via Google Maps on their smartphones. Apple is known for investing on, and ensuring user privacy on its devices and services.