It was recently reported that WhatsApp is testing forwarding limits to prevent the spread of spam and misinformation on its platform along with testing a new tab for Communities. Now, the company has added a new camera interface to the latest beta for Android.

WhatsApp features do not always roll out to iOS and Android users at once, so a new camera interface that was added to iOS months ago is just now becoming available for Android users.

According to WABetainfo, WhatsApp is releasing a revamped interface to some users on Android in beta version 2.22.8.11 of the app. The new interface features a redesign for the camera along with a new media button that allows users to directly access their gallery instead of scrolling through their recent pictures at the bottom of the screen.

In addition, the publication reports that WhatsApp has not removed the camera media bar as planned during the development of the revamped interface after some users complained when it was removed on iOS. The feature was subsequently restored in another update. 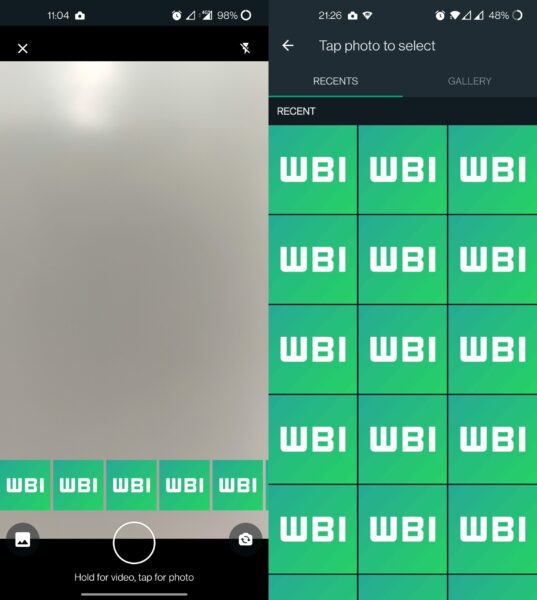 The new interface features for the camera and the redesigned media picker are now rolling out so they will become available to more users in the coming weeks. Hopefully, the new interface can be used alongside an increased 2GB limit for file sharing the company is currently testing, making it easier to send high-resolution photos to their contacts.

In related news, the company is readying a ton of features to launch this year like polls for group chats, the ability to migrate chat history from Android to iOS, and a new reactions feature for mobile and desktop. Message reactions are reported to be available in individual chat threads and group chat threads allowing users to react to a message using different emojis.