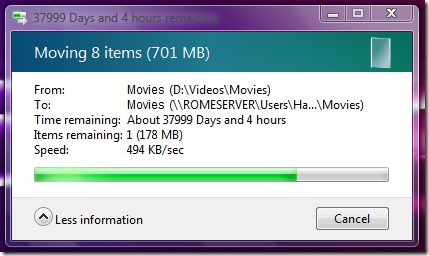 I come across this a lot, when I have to transfer files from my notebook to my PC. I use Vista Ultimate Edition with Service Pack 1. If anyway thinks that SP 1 solved issues, well, they didn’t solve enough issues. On the contrary, if I use Windows 7 or TeraCopy, the transfer is relatively faster and reliable. Still, people defend Vista. Annoying Amazing, isn’t it?

If Vista is that good an OS as some claim to be, we shouldn’t be seeing such issues. Still, I have to use it, as it brings more features on the table than the out dated XP. So, we do like Vista, but with such annoyances, it seems that Vista doesn’t like us.

Windows Vista was probably one of the most ambitious efforts by Microsoft in their history. Known as Code-name Longhorn, during its development period, Windows Vista turned out to be huge dud in the OS community. Not only was it slow and bloated, most of the promised features before and during development never made the cut in the final version. To top this all off, the operating system was released very late.

Despite all this, Vista sold a huge number of licenses, thanks in large part to the OEM agreements that Microsoft has. Apple took advantage of this golden opportunity to market Mac as a better alternative through their Mac vs PC ads and sold a huge number of their computers with Leopard installed. They even went on to mock Windows Vista during their keynotes at MacWorld and various other Apple events.

Microsoft, being the huge giant it is, was slow to move but eventually realized where it fell short. Windows 7 is the bandage effort that seems like it would definitely pay off but even at its best, it’s the OS that Vista should have been for starters. It doesn’t really bring anything new to the table but tries to fix for Vista’s mistakes.

Windows 7 is their saviour.

Whether, this would pay off for Microsoft, only time will tell. But all the best testing and trying out leaked builds is making us hopeful for now.