Microsoft seems to be on a role lately. The ‘Laptop Hunters’ series has really put a dent in the egos of Apple followers and Microsoft critics who have been defending the ‘Apple Tax’ and pointing fingers at the ads. The ads have certainly been greeted with a positive response by those towards whom they are targeted at – the average consumers. Now, it seems that Windows Mobile 6.5 will have a good time as well.

This Monday, Microsoft announced its partners for Windows Marketplace for Mobile. The list is huge and contains the heavy weighs of mobile application development. These partners will develop applications which will provide new and unique gaming, social networking, media, utility and personal productivity experiences. The lengthy list includes:

Seeing the success of the iPhone as a social networking device, Microsoft has appropriately focused on providing an engaging experience for Windows Phones. Microsoft has created a Facebook app which will launch this April with capabilities to capture video on their phones and upload it to Facebook, something which the current iPhones cant do. A new MySpace application will also be released this summer giving Windows Phone users real time access to their network. 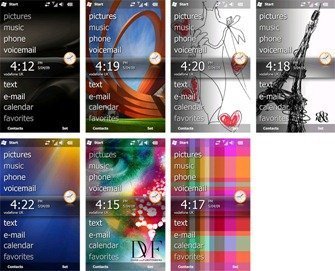 …will enable Windows® phone users to select pictures from their PC to set as background images, as well as choose colors to personalize their navigation bar, scroll bar and highlighted text. Once finished, their personal theme will be sent to their phone.

Seems like Microsoft is really putting a lot of work behind Windows Mobile 6.5. I’m certainly much more optimistic now then I was before for the future of Windows Phones. Here’s wishing good luck to Microsoft and hoping for a healthy competition to the iPhone.