Ed Bott has a good benchmarking review of how Windows 7 handle 512 MB of memory when compared to Windows XP and Windows Vista. I had recently posted about a touchscreen 6000 MHz UMPC with 512 MB running Windows 7 nicely, so it shows that Windows 7 is indeed a step forward in terms of performance on low-end systems. Good news for all you netbook advocates out there ( I’m not one of you, sorry ! ), and bad news for all the Linux zealots as they’ve got competition now. The interesting thing about Ed’s benchmarking is that he used the x64 edition of Windows 7 Beta, x86 version of Windows Vista and don’t know which version of Windows XP.

To keep it fair, he updated all the operating systems with any critical and recommended updates available for them. No third party software was installed apart from Firefox on Windows XP. All these operating systems were testing in a virtual machine. Here are the memory and disk usage results:

Here’s a graph with numbers normalized with XP = 100: 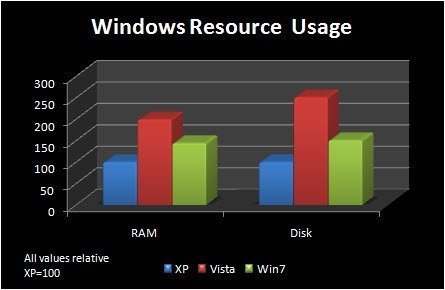 Although the comparison between x64 and x86 version of different operating systems doesn’t seem fair, it does tell a story of how improvements have been made from Vista to 7, and how much of a resource hog Vista was. I wouldn’t take these numbers as the final benchmark, as it’s just a Beta, which Microsoft themselves discouraged users to benchmark. We can hope these numbers to only improve if Microsoft sticks to its game plan with Windows 7. interesting times ahead.