Mac OS X developer Emilio Gomariz has made an amazing font named 114.psd Type, brilliantly arranging 114 Photoshop files. The idea was to utilize the ability of OS X to remember the positions of files when the windows are minimized and brings them back to the front. Each letter of the font is created using different files, from 1 file for I till 9 files for X. He placed the 114 Photoshop files in careful positions, minimized them on the dock and when he re-opened them, he got the font’s alphabets amazingly showing up on the desktop. 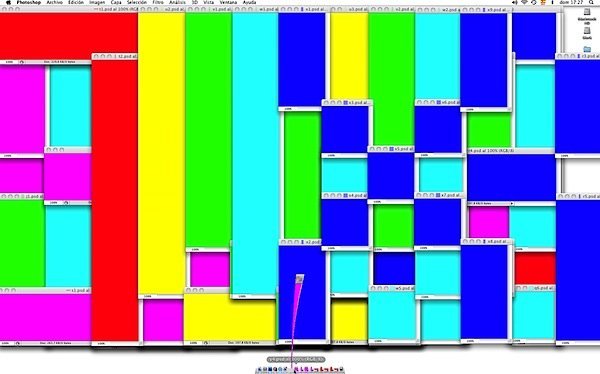 114.psd Type is a simple typography which I designed once again thanks to Mac OS X (maybe it reminds to Folder Type, also created with Mac OS X). The idea for this type came in when seeing that this operative system memorizes the position of any file or window when you minimize and maximize it. So I created 114 photoshop files (I only used six colors, I played with all possibilites in RGB with the numbers 0 and 255, excepted 0,0,0 and 255,255,255). Then I placed and ordered the files in the right position before minimizing them on the dock. And finally I captured the screen maximizing every file.

Emilio has also made a video of the 114.psd Type, check it out below: