AT&T enabled the Personal Hotspot feature for developers a couple of weeks back to test the feature on beta releases of iOS 4.3, as the feature has already been showcased on the Verizon CDMA iPhone 4 on its launch. Now with the public release of iOS 4.3 which is scheduled for March 11, the same day when iPad 2 will be launched, AT&T will be enabling the Mobile Hotspot to all its customers. It turns out however, the feature allows only 3 Wifi devices to simultaneously connect to the Personal Hotspot as opposed to the previously announced 5 devices support. 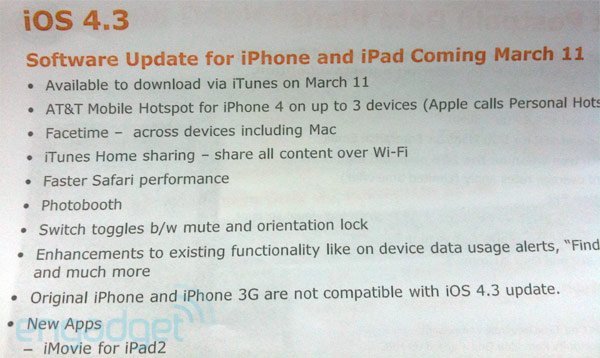 Now, according to Apple’s official iOS 4.3 page, it’s actually not AT&T’s fault. Rather, its the iOS 4.3 that currently supports only three WiFi devices through the Personal Hotspot connection. In order to achieve a simultaneous five device tether and enjoy AT&T’s superior 3G speeds, the remaining two devices will need to tether over a Bluetooth or a USB connection. Since the feature is iOS specific and not the carrier itself, the Verizon CDMA iPhone 4 will also support the same number of three wifi devices tethered at any one time.