Apple introduced the Personal Hotspot feature when it showcased the Verizon CDMA iPhone 4 for the first time. Soon after, the feature was also incorporated in the iOS 4.3 beta released to developers which brought the WiFi hotspot to AT&T / GSM iPhones as well, though the feature is carrier dependent. To battle the competition, AT&T has just provisioned the Personal Hotspot sharing feature of iOS 4.3 beta 3 for developers which strongly hints that it will be offering the feature to its subscribers pretty soon. 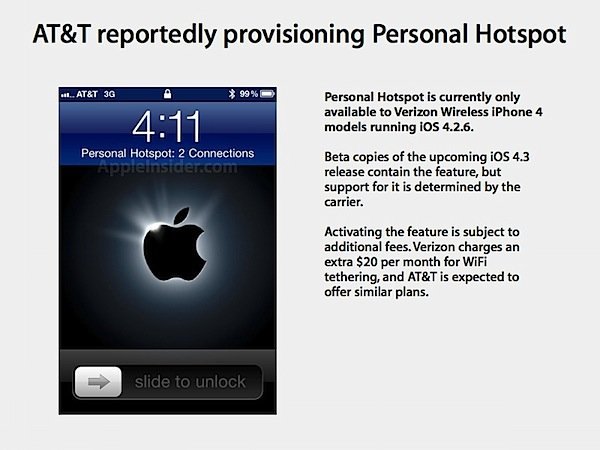 AT&T hasn’t committed to supporting the new feature yet, but is expected to in the face of the competitive threat issued by Verizon. Other carriers can choose whether they will support the OS feature.

The individual reporting AT&T’s acquiescence in provisioning the feature on his phone running the developer build says the carrier agreed “after I mentioned Verizon a few times.”