While we were discussing the expected release of iOS 4.3 in March, Apple has just dropped iOS 4.3 beta 1 build 8F5148b to the developers which is now available for download. iOS 4.3 beta 1 is available for iPhone 4, iPhone 3GS, iPad, iPod Touch 3G / 4G and Apple TV. Interestingly there is no iPhone 3G version provided. Has Apple dropped iPhone 3G support for iOS 4?? We’ll find out soon and update you as soon as we have more news. 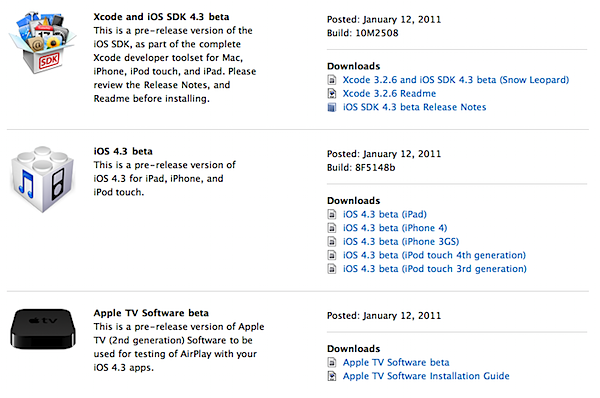 It looks like iOS 4.3 has some cool new gestures built specifically for the iPad. 4 & 5 finger gestures; pinch to the home screen, swipe up to reveal multitasking tray, swipe left/right to switch apps.

There’s no news yet on a WiFI “Personal Hotspot” option in iOS 4.3 like the Verizon iPhone 4, but we’ll keep you posted as the story develops. Stay tuned!