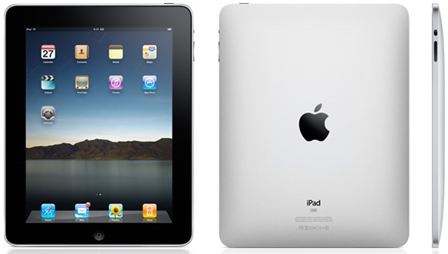 Whether you like it or hate it, the hardware specifications on the iPad are nothing to laugh at. There have been many tablets ( Android and Windows ) before the iPad, but in terms of looks and hardware, Apple has really done an awesome job considering the low price (starting from $499). The device weighs in at just 1.5 pounds and the thickness is just 0.5 inches. The back is made of aluminum just like the iPod Touch. The design is totally something you would expect from Apple and did we mention it’s all recyclable?

The iPad has a multi-touch capacitive 9.7-inch glass display which is LED with IPS technology. This means that it has excellent viewing angles. The resolution of the device is 1024 x 768 – it’s not widescreen which is a disappointment.

The device will ship in 2 models. One would be WiFi only which will have WiFi 802.11 a/b/g/n and Bluetooth 2.1 while the 3G+WiFi model will have 3G support along with the previously mentioned connectivity options.

iPad will be available in 16GB, 32GB and 64GB flash drive variants.

It contains a brand new 1Ghz A4 custom-designed processor by Apple. It’s supposed to provide high performance and battery life to the iPad.

The battery time is up to 10 hours of continuous video playback which is pretty good in our opinion. It should also last the whole day for a student or provide enough time for back to back movies. Charging will be done through a 30 pin connector.

Wi-Fi, Assisted GPS, digital compass and cellular are available for location features in the 3G model, while the Wi-Fi only model has a digital compass.

Accelerometer and ambient light sensor are included in the iPad. While for input and output a dock connector, 3.5 mm headphone jack, speakers, microphone and SIM card tray (3G model) are available.

Despite all the rumors, the iPad runs on iPhone OS 3.2 according to Engadget.