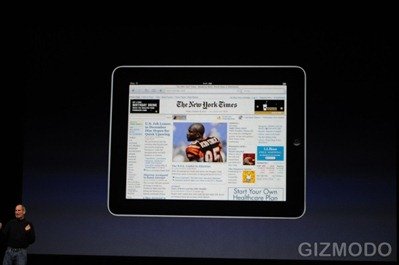 After more than a year of speculation, Apple has finally unveiled its tablet called the iPad. Aimed to be the device to replace slow netbooks, and provide functionality that’s better than the smartphone and Macbook at some tasks such as “Browsing the web. Doing email. Enjoying and sharing pics. Watching videos. Enjoying music. Playing games. Reading ebooks”, it’s like a huge iPhone. The operating system used is very familiar to the iPhone OS and provides an excellent finger friendly touch experience – something Microsoft failed at doing with Windows 7.

The iPad has large screen but touch friendly versions of iTunes, iPhoto and Map applications included that look like a cross between the OS X and iPhone OS versions. The 9.7 inch IPS display is full capacitive multi-touch and is powered by Apple’s own 1Ghz processor. It’s 0.5 inches thin and weighs just 1.5 pounds. Wifi 802.11n, Bluetooth, accelerometer and compass are included while it’ll be available in 16, 32 and 64GB versions. The battery life is an incredible 10 hours of continuous video playback. As expected, it also runs iPhone Apps. Sound like the perfect tablet !

I’ll be providing more updates as they are unveiled, meanwhile check out the images of the iPad below via Gizmodo: 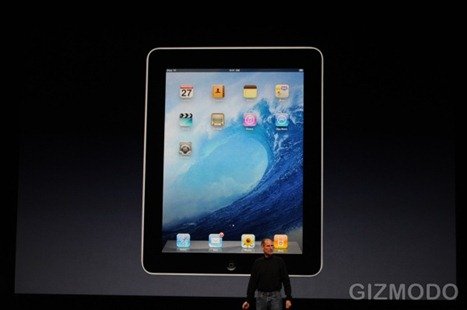 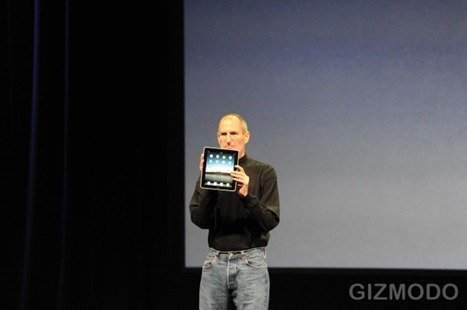