According to Patently Apple, a new patent has been won by Apple for a high tactility (Magic) glove system which would work with all capacitative touch screens. A big number of handheld devices including all of Apple’s iOS devices, are using capacitative screens. These advanced touch sensitive screens only receive input through human body’s natural conductivity via skin. Thus, when wearing any regular wool or leather gloves, all handhelds with such capacitative touch screens are rendered almost useless. 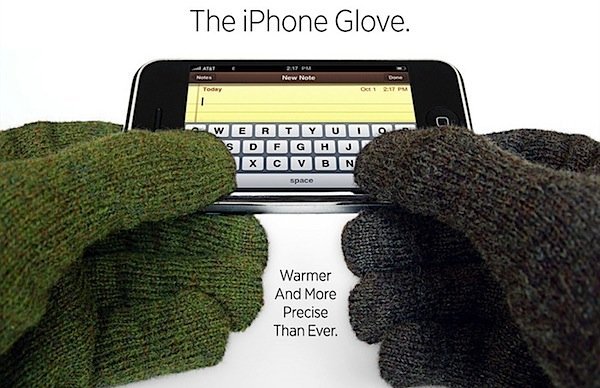 Since Apple’s all mainstream handhelds such as iPhones, iPod touches and iPads cannot be used wearing an ordinary glove during the cold seasons, Apple is researching ways to build gloves that work around the issue. While these “Magic Gloves” are sure to be as stylish as all other Apple accessories, we suspect they won’t come cheap either.

According to Patently Apple:

This invention is directed to a glove system including an inner liner and an outer liner operative to transmit user inputs to the input mechanism of an electronic device.

A glove that includes an inner liner and an outer shell may be provided. The liner may include a palm portion and one or more fingers operative to receive a user’s hand. The liner may be constructed such that the user receives tactile feedback when the user manipulates the input mechanism of an electronic device while wearing the liner.

The inner liner may be manufactured from any suitable material, including materials with properties similar to human skin. For example, the inner liner may be manufactured from a material that has a low thermal conductivity, electrical resistivity similar to human skin, “anti-sticky” attributes, or any other suitable property. In some embodiments, the material for the liner, the outer shell, or both may be selected to closely mimic the tactile effect of manipulating the electronic device using bare fingertips.

[via 9to5Mac, via Patently Apple]