iPhone 5 has been Apple’s best selling iPhone to date. Over 5 million iPhone 5 were sold over the launch weekend. But as soon as people started getting their hands on the 6th generation iPhone, most of them started noticing a purple flare that appears on certain pictures taken with iPhone 5’s camera.

Last week, when a Gizmodo reader Matt contacted Apple support regarding the iPhone 5 camera issue, the support staff replied suggesting to angle the camera away from the bright light source when taking pictures. This led people to start believing that it’s yet another case of ‘holding the iPhone wrong’ which brought back memories of the infamous antennagate ‘issue’ with iPhone 4. 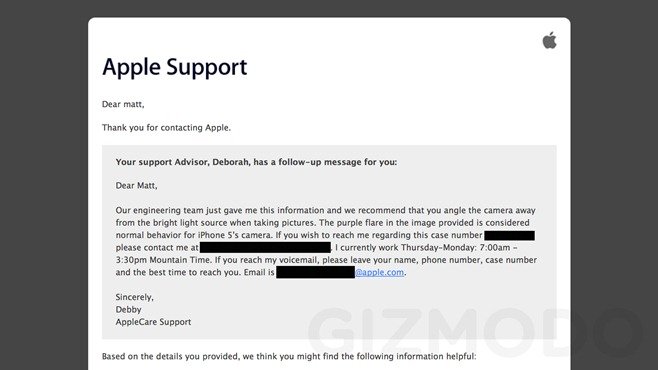 Today, Apple has publicly acknowledged the purple flare problem in iPhone 5 camera by posting an article on its online support page and providing an explanation:

Most small cameras, including those in every generation of iPhone, may exhibit some form of flare at the edge of the frame when capturing an image with out-of-scene light sources. This can happen when a light source is positioned at an angle (usually just outside the field of view) so that it causes a reflection off the surfaces inside the camera module and onto the camera sensor. Moving the camera slightly to change the position at which the bright light is entering the lens, or shielding the lens with your hand, should minimize or eliminate the effect.

Though the response says that these purple flares can pop up on pictures taken with any iPhone camera,  a comparison of pictures taken by iPhone 5 and iPhone 4s shows that the issue is apparent in iPhone 5. 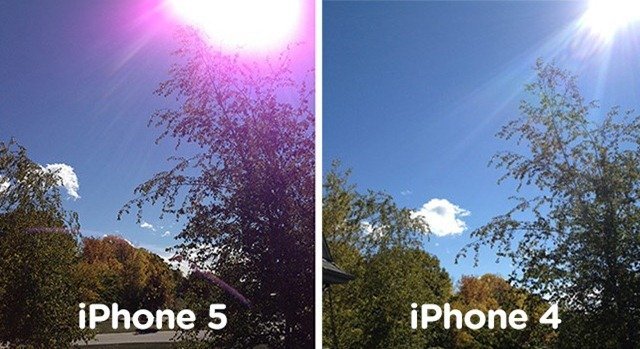 The Next Web has refuted these claims by providing proof that the same ‘problem’ existed in iPhone 4s as well. This is actually chromatic aberration which exists in even professional cameras and multiple solutions are used counter it.

Many people are claiming that this purple flare problem is due to the introduction of a sapphire lens in iPhone 5 camera but Apple has rejected all these complains claiming that that the purple flare is considered ‘normal behavior’ for iPhone 5 camera and the sapphire lens has nothing to do with this. It happens when light causes reflection off the surfaces inside the camera module, onto the camera sensor. So, to minimize the effect, change the lens position to minimize light exposure onto the lens or shield the lens with your hands.