Apple has released iOS 11 Developer Beta Update 1 for a selected number of devices. The new update is very small, around 30MB in size for most devices and is available for download via Settings > General > Software Update. The new build number for iOS 11 developer beta 2 update 1 is 15A304j while iOS 11 beta 2 was 15A304i. 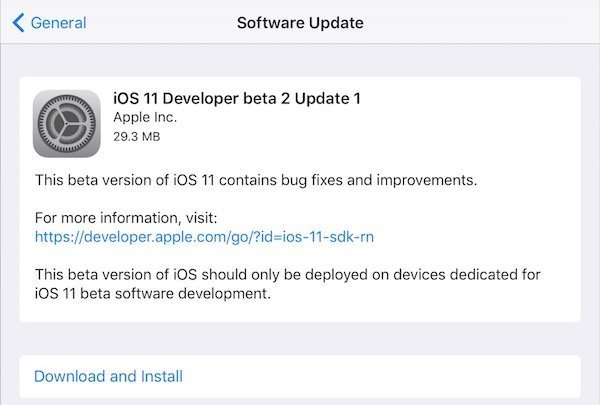 iOS 11 developer beta 2 was released just a few days ago, on 21st June with a number of refinements and bug fixes. Check out our detailed coverage of all the new features in iOS 11 here and here. This new version released today contains just one important fix for devices which could not be be restored to iOS 10, after updating to iOS 11 dev beta 2. This means that if you want to go back to iOS 10 from iOS 11 beta 2, you must install iOS 11 developer beta 2 update 1 to be able to do so.

To revert to an earlier version of iOS, follow the instructions shown on the Apple support site: http://support.apple.com/en-us/HT203282.

The following devices are receiving this update:

The next major update to iOS 11 is expected to be the public beta release, which should be available this week. The release will be accompanied by public betas for macOS and for the first time, tvOS for Apple TV. All these operating systems will be released to the general public this fall.

If you have not yet upgraded to iOS 11 beta 2, click here to find out how you can download and install it on your iPhone, iPad or iPod touch. If you feel that it is too unstable for your daily usage, you can downgrade to iOS 10 by following our guide. Just make sure that you upgrade your iOS 11 device to this new update released today, to be able to restore successfully to iOS 10.