The Unicode Consortium has released Unicode Standard 10 with both core specification and data files. The latest version of Unicode is loaded with 136, 690 characters, and 139 scripts which include four new scripts and 56 new emoji characters. Focusing on delivering to a diverse set of people around the world, the new characters and scripts are added to support lesser-used languages and unique written requirements like Nüshu, Gujarati signs, Hentaigana character and four others. Click here for a complete list. The latest update is released with update of three specifications: Unicode Collation Algorithm, Unicode Security Mechanisms and Unicode IDNA Compatibility Processing. It is expected that Unicode 10 will be integrated in smartphones by the end of this year.

Users will have access to a new set of expressive symbols like a set of Typicon marks and symbols, a Bitcoin sign, and 56 new emoji characters to use. The new emojis include 9 faces, 13 food items, 7 fiction characters, 3 leisure activities, 5 animals, 5 clothing articles, 6 human symbols, 1 organ, 1 affection gesture, 2 affection symbols, 2 sports, and 2 transportation vehicles. Click here for a complete list of 56 new emoji. 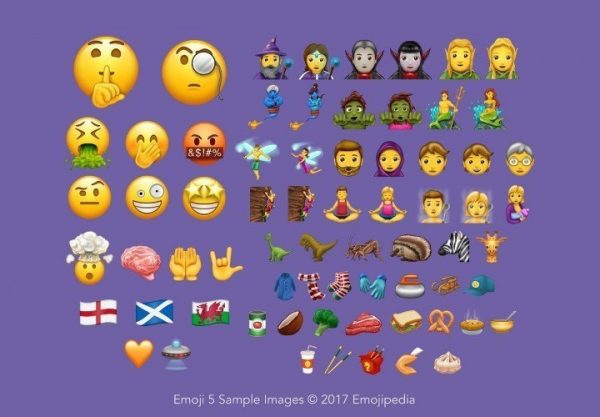 It is interesting to see that Unicode Consortium, which delivers a diverse set of characters, has yet again included two eye catching characters: a woman in headscarf and a breastfeeding mom.  As Apple is testing iOS 11, it is expected that the company will not delay the integration of the new characters and might make them available for users by the end this year. If not now, they are likely to appear in minor updates to iOS 11 by next year. The new emoji are part of Android O beta and will be available in the public release of the OS.

Unicode Consortium is a non-profit organization working to develop, expand and promote the use of Unicode Standard which is the foundation of all modern software, devices and communication around the globe.