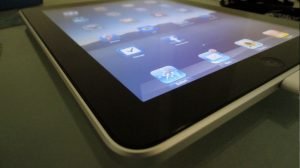 If you are still in denial that the iPad craze has taken the world by storm, check out these latest figures released from Apple. Over 2 Million iPads have been sold so far in under 60 days since the April 3 launch. When you compare these to sales figures of competitors like Joo Joo ( and the deaths of tablets and concepts such as HP Slate and Courier respectively ), you’ll realize why these numbers matter a lot.

While most of these devices have been sold in the US, and International sales have only recently begun, a lot of people have reached out on ebay to buy their iPads from US users. I got my iPad from the U.S. as well because I couldn’t wait to long.

Whether any competing Android or Windows 7 Tablet will be able to gain as much success as the iPad is yet to be seen. While I’m not too hopeful of a Windows 7 tablet being too successful ( let’s face it, it’s NOT a touch OS ), Android is the only OS that is currently giving the iPhone OS a run for the money.

CUPERTINO, Calif., May 31./ Apple® today announced that iPad™ sales have topped two million in less than 60 days since its launch on April 3. Apple began shipping iPad in Australia, Canada, France, Germany, Italy, Japan, Spain, Switzerland and the UK this past weekend. iPad will be available in nine more countries in July and additional countries later this year.

"Customers around the world are experiencing the magic of iPad, and seem to be loving it as much as we do," said Steve Jobs, Apple’s CEO. "We appreciate their patience, and are working hard to build enough iPads for everyone."

iPad allows users to connect with their apps, content and the Internet in a more intimate, intuitive and fun way than ever before. Users can browse the web, read and send email, enjoy and share photos, watch HD videos, listen to music, play games, read ebooks and much more, all using iPad’s revolutionary Multi-Touch™ user interface. iPad is 0.5 inches thin and weighs just 1.5 pounds—thinner and lighter than any laptop or netbook—and delivers up to 10 hours of battery life.

Developers have created over 5,000 exciting new apps for iPad that take advantage of its Multi-Touch user interface, large screen and high-quality graphics. iPad will run almost all of the more than 200,000 apps on the App Store, including apps already purchased for your iPhone® or iPod touch®.