Silicon Valley tech giants have joined the public, organizations, celebrities, and others in support of fair voting rights. Apple, Amazon, Facebook, and Google have signed a public letter supporting people’s democratic right to vote and opposing “discriminatory legislation” that would prevent people from exercising that right.

The protesting is swelling after Georgia passed a new voting law that has placed more restrictions on absentee voters and reduced the voting time of early voting on the weekend. The bill was opposed by Democrats and supported by the Republicans. The new legislation has created an offset to such an extent that recently producer Will Smith of ‘Emancipation’, an Apple TV+ movie, has stopped filming the movie in Georgia to register his protest.

Apple joins other big corporate names to show solidarity with voting rights in the U.S

Organized by the former chief executive of American Express, Kenneth Chenault, and the chief executive of Merck, Kenneth Frazier, a statement was published in The New York Times and The Washington Post which is condemning the oppressive voting legislation across the country. Along with Apple and Google, big weights like Netflix, Starbucks, General Motors, Facebook, and Amazon have also signed the public letter. The message reads:

WE STAND FOR DEMOCRACY

A Government of the people, by the people. A beautifully American ideal, but a reality denied to many for much of this nation’s history. As Americans we know that in our democracy we should not expect to agree on everything. However, regardless of our political affiliations, we believe the very foundation of our electoral process rests upon the ability of each of us to cast our ballots for the candidate of our choice. For American democracy to work for any of us, we must ensure the right to vote for all of us. We should feel a responsibility to defend the right to vote and to oppose any discriminatory legislation or measures that restrict or prevent any eligible voter from having an equal and fair opportunity to cast a ballot. Voting is the lifeblood of our democracy and we call upon all Americans to join us in taking a nonpartisan stand for this most basic and fundamental right of all Americans. 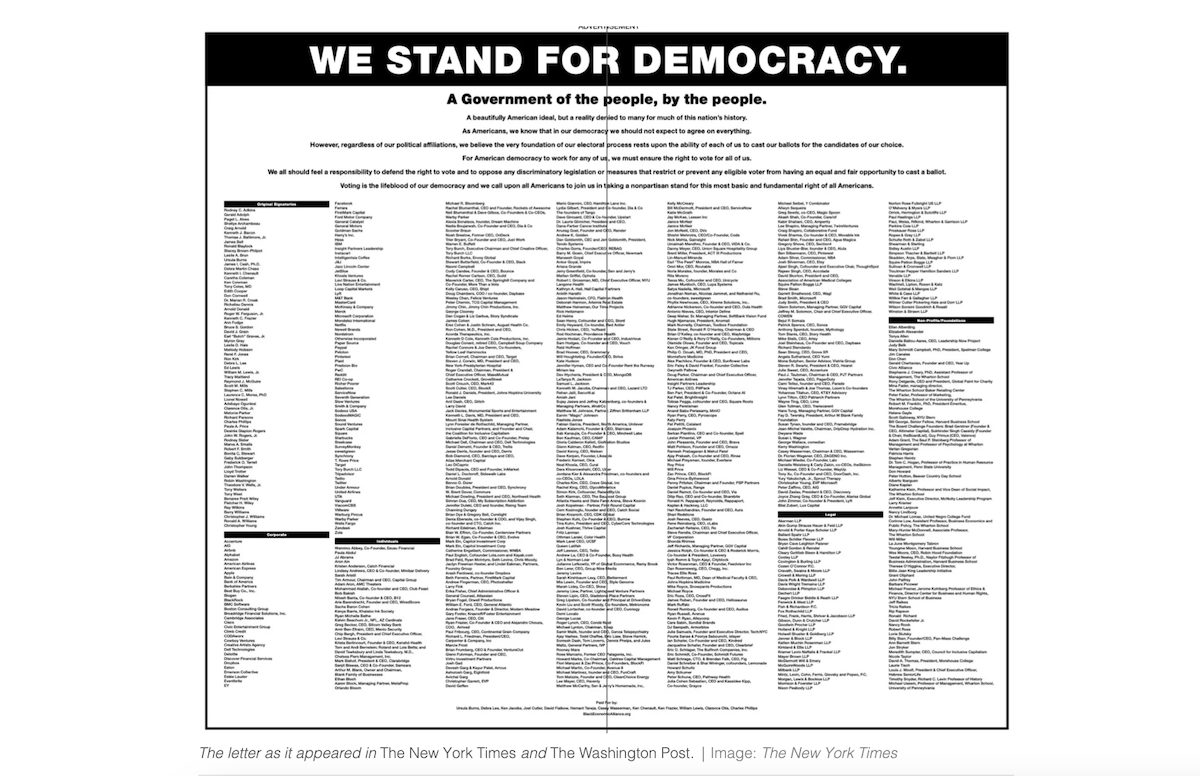 Although companies like Delta Air, Coco-Cola, Home Depot are abstaining from signing the letter, the protesting voices are making profound ripples to upset the Republican representatives. The New York Times reports that:

It was the biggest show of solidarity so far by the business community as companies around the country try to navigate the partisan uproar over Republican efforts to enact new election rules in almost every state.

Senior Republicans, including former President Donald J. Trump and Senator Mitch McConnell, have called for companies to stay out of politics.

Furthermore, upset about the newly passed voting limitations, Apple’s CEO, Tim Cook said that the right to vote is fundamental in a democracy for which American people, especially the Black community, had vigorously struggled for. He suggested that legislators should use technology to allow every eligible citizen to participate in the electoral process.