Huawei and Samsung, both achieved 113% and 46% annual growth, respectively. Apple’s annual growth is in the negative. Although Apple Watch experienced a 13% drop in shipments in Q1 2020 from Q1 2019 due to the COVID-19 pandemic, it still leads the global smartwatch market with a 36.5% market share. That figure makes the Cupertino tech giant the leading global smartwatch brand in the industry.

The current shipment trends reflect that Apple is likely to achieve 100 million shipments mark of Apple Watch in a few months. 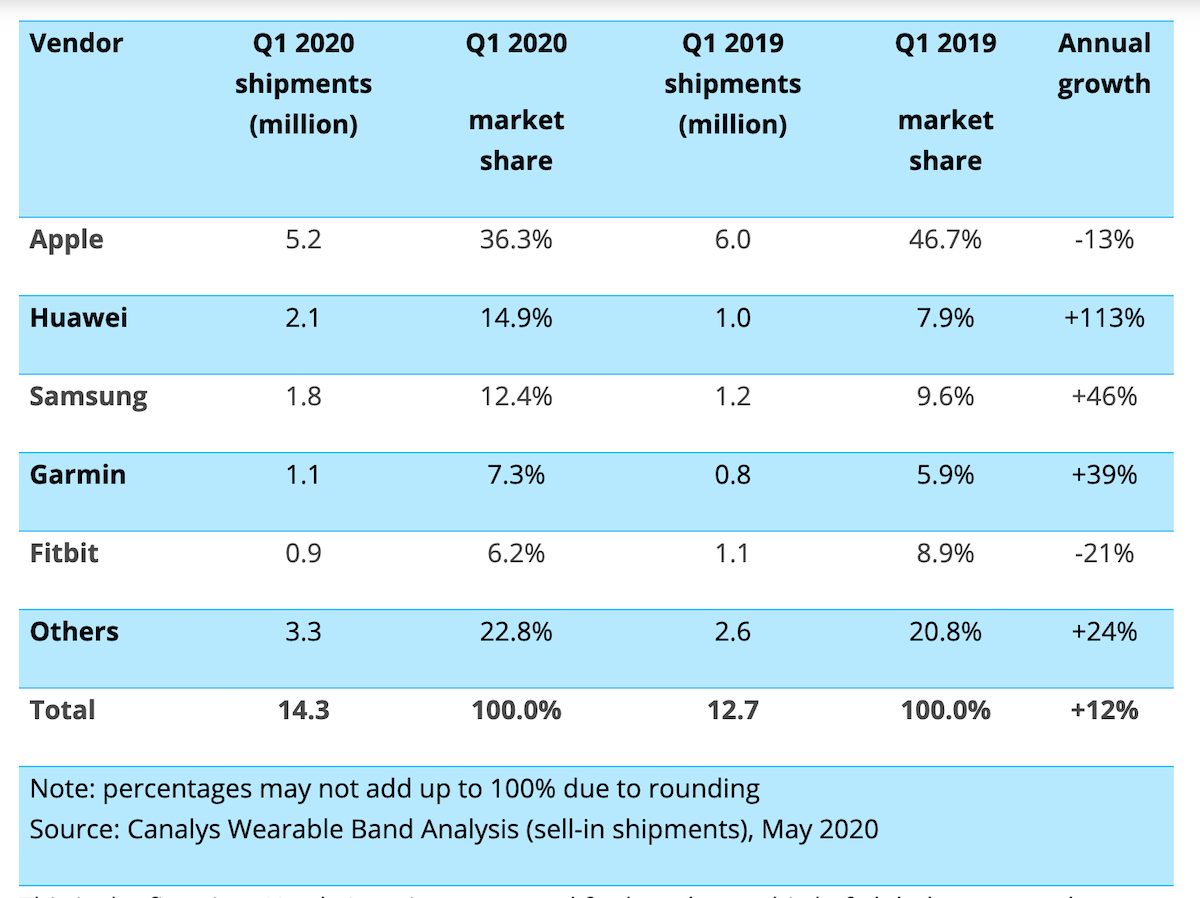 China the growth driver of Apple Watch in 2020

In Q1 this year shipments of Apple Watch in China grew by 66%, approximately 2.5 units, as Chinese vendors filled for huge orders of LTE smartwatches supported by the country’s eSIM coverage in time for Chinese New Year. On the contrary, shipments in North America dropped for the first time ever with only making 1/3 of the units shipped globally. Vincent Theilke, Canalys’ analyst explained that:

“Strong overseas demand for smartwatches helped offset the Apple Watch’s slow performance in Europe and North America, which was due to Apple customers switching their attention to AirPods as a ‘must-have’ accessory. Notably, Samsung and Garmin increased Q1 sell-in to these markets.” 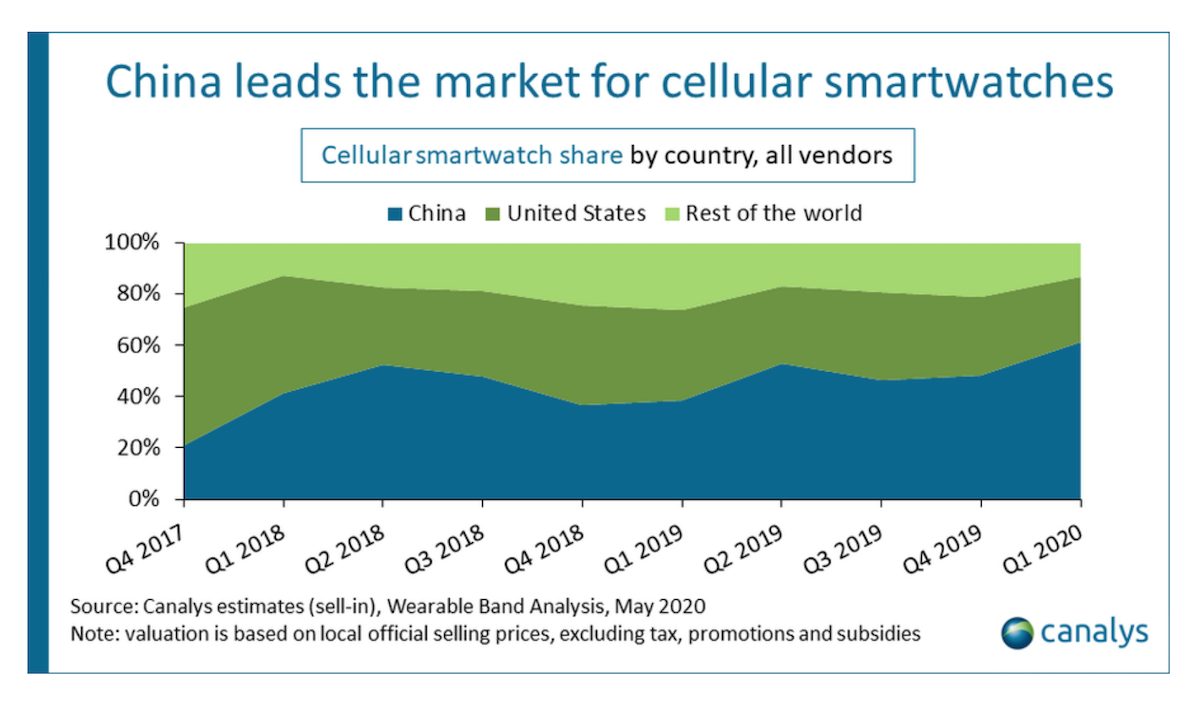 Theilke also added that in other regions of the world Apple and Huawei are attracting new users and:

“Apple got a boost from its latest carrier partnerships in Southeast Asia and Latin America, and Huawei included its smartwatch with purchases of its latest P40 flagship smartphone. As Android smartphone vendors in emerging markets face rising competition from challengers such as Xiaomi, Oppo, and Vivo, the Apple Watch is locking in an increasing portion of the iOS base there, offering greater assurance of future iPhone upgrades.” 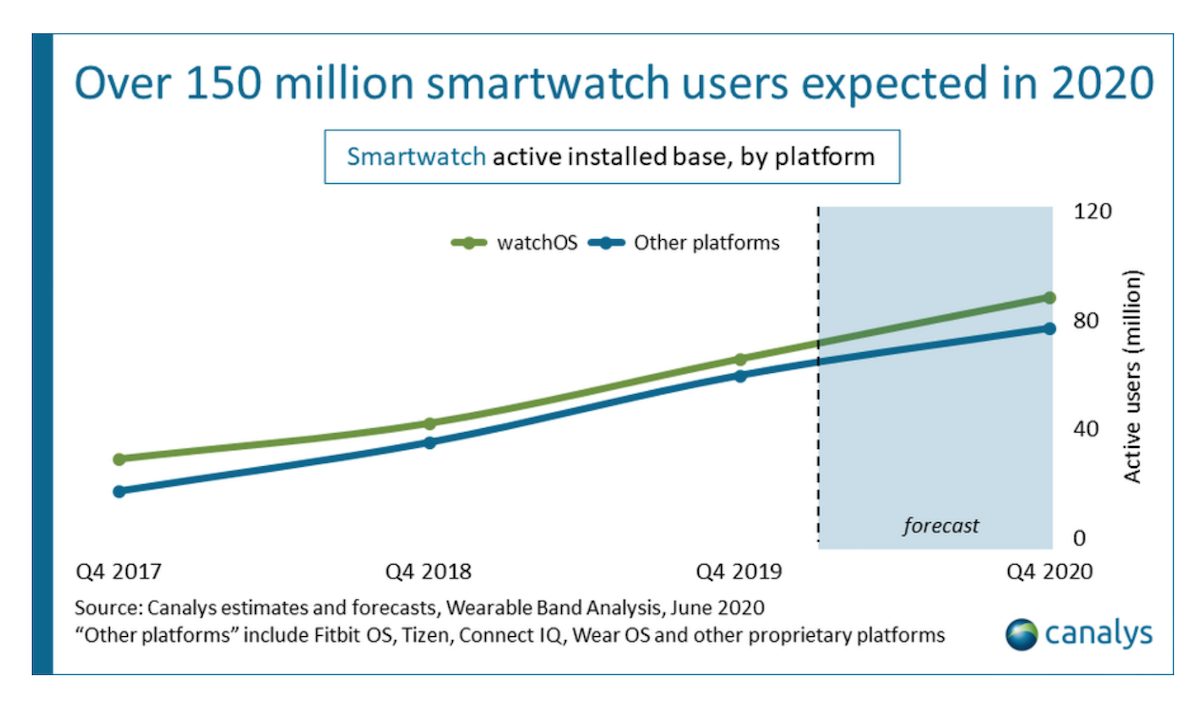 Apple’s smartwatch is more than just a digital tool to tell time; it is a health monitoring device, daily activity manager, sleep tracker, easy and quick payments device, and much more. Apple Watch Series 4 and later also gained the ability to record ECG readings which has proven to be beneficial in saving lives.

It is expected that the company will its next-generation smartwatch and watchOS 7 this year with even more beneficial features to add value to the device.