The U.S Patent and Trademark Office has published a new patent for Apple’s iPhone. The filing approves a water ejaculating mechanism from the speakers of the future iPhones. The new system will prevent the smartphone’s internal hardware from “moisture” which includes steam, gases, liquids, saltwater, freshwater, and other moist substances.

Currently, the water-ejection mechanism is available in Apple Watch Series 2 and later models which allows users to wear the smartwatch during water-related activities like showering, surfing, swimming, washing, and others. When enabled, the speaker and sensor module with a hydrophobic coating of the waterproof system prevents the liquid from seeping in the wristband, and on turning the digital crown, eject the access.

Although Apple does not market the iPhone as water-proof, the iPhone 7 and later models are. This new patent will make the future iPhones, even more, water-resistance and will enable speakers to work underwater for video recording.

The sketches attached in the filing, illustrate that the company plans to use two water-eject systems in an iPhone, by pressure, and by heat. The new pressure-based moisture removal system in 5-B includes a hydrophobic coating in the walls of the front volume that will repel water and forcefully eject the remaining moist substances from the speakers. The mechanism will have similar functionality as the Apple Watch water-eject system. 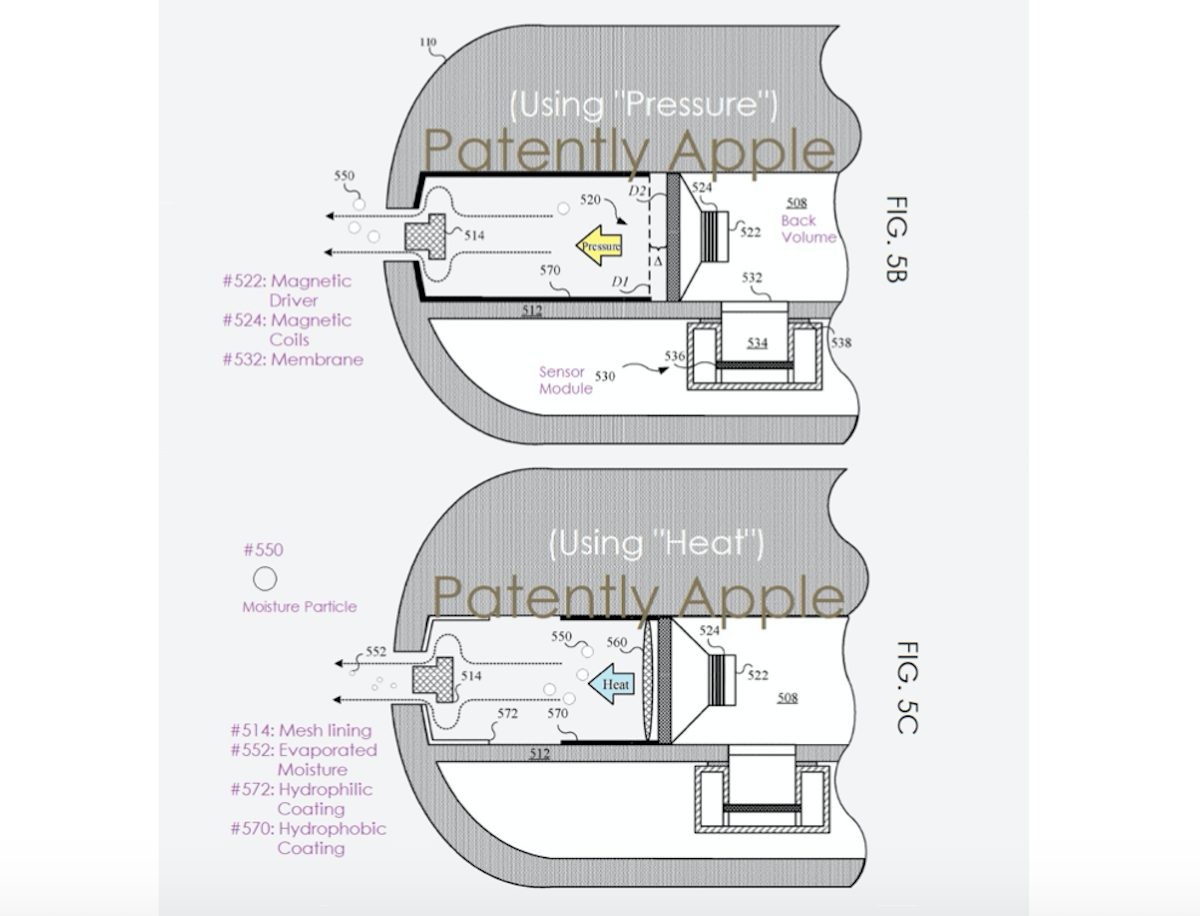 The 5-C illustration shows the use of magnetic coils to evaporate the remaining liquid particles from the device by generating heat. Using hydrophobic coating and hydrophilic coating, this moisture removal system will eject the evaporated moisture through the speakers’ opening

In contrast to the 5-B system, the 5-C system will include an additional acoustic mesh barrier to prevent metallic particles from entering the device through the speakers’ opening which can interfere with the magnetic driver of the speaker consisting of a magnet.

The Cupertino tech company filed for the patent in 2019 and only got approval now. The filing does not mention the model or the time frame when this feature will be available on the smartphone. Users must keep in mind that Apple does not necessarily release all the filed features in its devices. Having said that if the company does offer this new system that will surely add more value to the iPhone.

Here is a video of how the watch-ejection system works on the Apple Watch which allows users to almost never take the wristband off.