Just after the launch of iPhone 4, many users found that when you touch its Antenna Band, it loses Signal strength. Users are reporting that when they hold iPhone 4 from the bottom left corner then the signals drops. Today Engadget approached Apple about this problem and got an official statement :

Gripping any mobile phone will result in some attenuation of its antenna performance, with certain places being worse than others depending on the placement of the antennas. This is a fact of life for every wireless phone. If you ever experience this on your iPhone 4, avoid gripping it in the lower left corner in a way that covers both sides of the black strip in the metal band, or simply use one of many available cases.

Apart from this official statement , Engadget also published an email in which Steve Jobs answered about this issue. 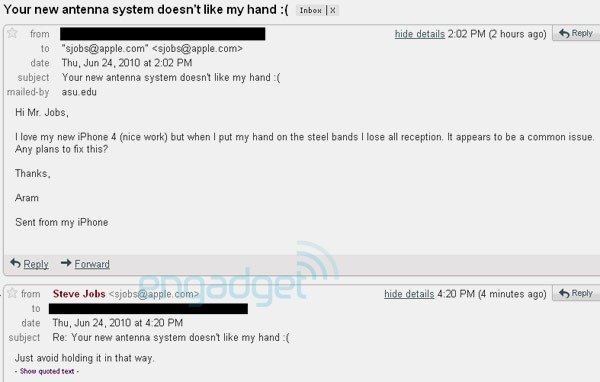 Looks like Apple is just hiding from the problem and instead they are just asking the users to change their habit. The official statement and email reply by Steve Jobs both sounds little bit strange. These answers are just like when Google Nexus One was having 3G issues, they asked their users to change their location rather than suggesting any solution. The other solution which is to buy the available case for iPhone 4 is good enough but still this is just like forcing your user to buy an accessory just to be able to get good signals.

We know that their were problems like these in previous generations of iPhone. Signal strength problem is also reported with Nexus One. But still Apple is one of the best smart phone making companies in the world and we expect them to respond better than Google. They could have settled this problem in the design of iPhone but they ignored it. Anyhow at this point, buying a case or bumper are the only solutions of this problem.