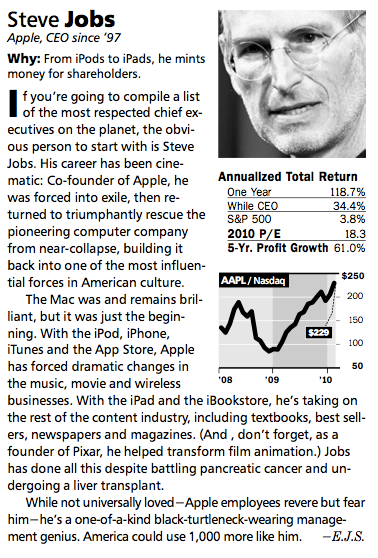 Some other names from technology-related companies that were in the list of 30 were Yun Jong-Yong of Samsung ,John Chambers of Cisco Systems, Jeff Bezos of Amazon, Margaret Whitman of Ebay and Eric Schmidt of Google.

The #1 CEO on the list, Steve Jobs, delivered a whopping 3,188% industry-adjusted return (34% compounded annually) after he rejoined Apple as CEO in 1997, when the company was in dire shape. From that time until the end of September 2009, Apple’s market value increased by $150 billion.

Probably the world’s most valuable CEO is Steve Jobs of Apple, as shown by stock dips on news of his medical problems.Apple recently hit a record, with a market value topping $200 billion, a reflection of the Street’s confidence that a healthy Jobs (at least from what we can tell) continues to keep Apple ahead of the game. Jobs likely accounts for $25 billion or more of Apple’s market value.