Astropad, the app that turns your iPad into a graphics tablet for OS X, has been updated to version 2.0. The latest update contains major performance improvements for both processor and memory usage, new velocity control, fine-tuned pressure curve for natural drawing, software compatibility with more third-party apps, updated user interface and more. 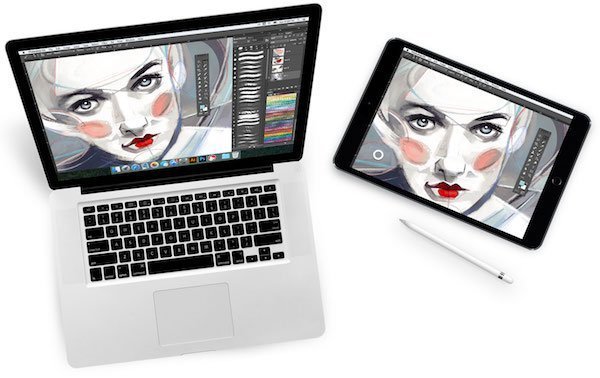 The major parts of the update focus on improved performance. Astropad’s high-performance engine, Liquid, has been upgraded to run three times faster than before with reduced pixelation. The app also uses 3 times less CPU and 4 times less memory than before which improves the longevity of iPad’s battery life. A new velocity control analyzes network conditions to give the best results by balacing latency and image quality.

Astropad is one of the most innovative apps available for the iPad. Although, it worked well even before the Apple Pencil, its effectiveness and usability has improved multiple folds afterwards. Astropad supports most popular iOS styluses like Apple Pencil, Wacom, Pogo Connect and more.

Astropad works with Macs running OS X 10.9 and above. The iPad can be connected to the Mac via WiFi or USB cable. Users can create master pieces on iPad either directly in Photoshop or other Mac apps like Affinity, Manga Studio, Pixelmator and others. The iPad Pro’s amazing retina resolution, along with Pencil support, make it perfect for animation, photo editing, painting, sketching and more. Coupled with Astropad, iPad Pro makes a much better graphics tablet compared to the top solutions out there.

The latest version of Astropad is available for free on the App Store for existing users. New users can purchase it for $29.99 from the App Store, while the companion Mac app can be downloaded from Astropad’s website.