Baldur’s Gate 3 is now available as a native M1 game for Apple Silicon Macs. Even though the game is currently in early access, its performance benchmarks show that M1 Macs are not ready for mainstream AAA games. The game is not very demanding when it comes to visuals compared to many other games, and the graphical improvements between the Rosetta and M1 native versions are almost non-existent.

MrMacRight did a complete performance review on YouTube in which he compared the newly released M1 native version with the latest Rosetta version and the original Rosetta release. 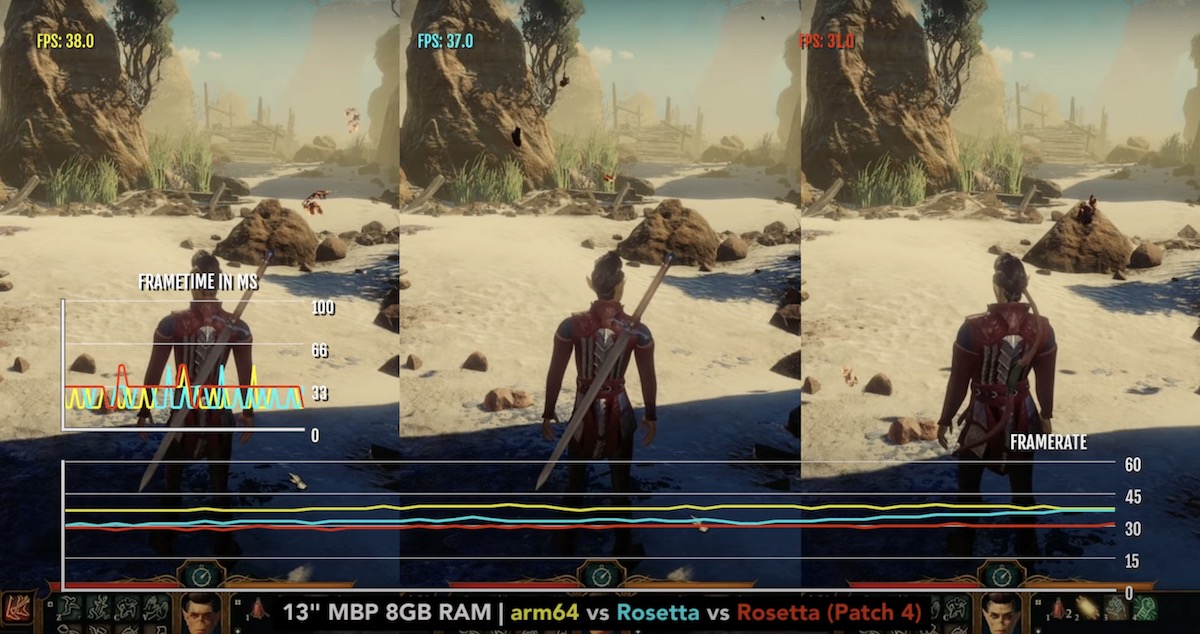 The video starts with an issue with Steam which makes it difficult to release M1 compatible games. Elverils, the developers behind Baldur’s Gate sidestepped the limitation by creating a game launcher that allows users to select either the Rosetta or native version. Selecting the native version launches another pre-game menu which is the native M1 Mac version and allows the game to run as such. Until Steam releases a native M1 Mac update, developers will have to rely on such workarounds.

The native version is not perfect in terms of features though. It lacks Steam integration (due to Steam being x86 only) and cross-saves only work when the game is played using Rosetta. However, cross-play with Windows works even in the M1 Mac build.

Moving on to performance, the difference between the Baldur’s Gate build that runs using Rosetta translation layer, and the native M1 Mac build is non-existent. The framerates are almost the same and the best increase you might see would be 2-4 fps. The game also requires 10GB Unified Memory to perform the best which means that you must have an M1 MacBook Air, MacBook Pro, Mac mini, or iMac with 16GB Unified Memory to play this game.

If you have 16GB Unified Memory, you should expect 40-55fps at 1080p resolution and ultra-quality settings. The frame rate is not stable but it definitely gives a playable experience. Lowering the quality settings a bit should help reach 60fps.

What if you have an M1 Mac with 8GB RAM? The performance will stutter and become almost unplayable sometimes. Even if you lower the quality settings and resolution, the experience will not be good. Compared to Baldur’s Gate patch 4, this is a reduction in performance as you could play at 1080p resolution and ultra texture quality at more than 40fps. Even a MacBook Air with 7-core GPU could run the game well before but the latest patch 5 has impacted the experience negatively.

The developers are aware of these issues and are working to improve performance for 8GB machines, but for a fully native release, things are not looking well, even for 16GB machines. Considering the performance that M1 Macs provide with the fastest integrated GPU, we expected much better performance. The requirement for 10GB RAM for the game is just surprising and we are not sure if this is a good sign for M1 Macs as gaming machines. As things stand, the game performed better before using Rosetta.