For all the iPhone screenshot lovers, the fun annotation app, Blink, has been upgraded to version 1.0.8 which allows you to create and share fun screenshots and memes. After taking a screenshot on your iPhone, you can edit it right away in Blink; add text, draw, insert large size emojis or highlight content. The app also offers interesting social networking components such as sharing your screenshot in just two clicks via Blink Instant and getting a link back to the place where the screen shot is originally from via Hotlink Blink. For example, you could take a screenshot in Spotify and share it with a link to the song you were listening to. 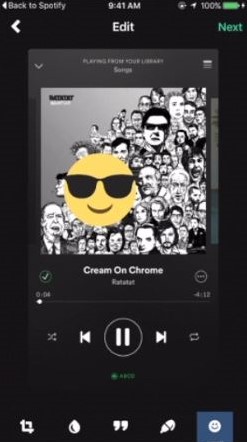 ‘Blink Instant uploading’ is a new feature in the update which enables you to, easily and quickly, upload and share your artwork. It also lets you view screenshots saved by others. Other improvements in the new version include better rotation and resizing of emojis, resolution of blank image issue and overall stability improvements.

As an annotation app, Blink provides more creative freedom to its users as compared to its competitive app, Skitch. With Skitch, you can only mark up or label your screenshots, but with Blink you can be more expressive by adding fun features to your screenshots.

Blink is available at the Apple App store for free. It requires at least iOS 8 and is compatible iPhone and iPod Touch. Download it and let you creative juices flow as the app is very intuitive and easy to navigate, which makes Blink the fastest way to create and share fun screenshots and memes.