It was about a year and a half ago that  new concept product called the Courier was leaked from Microsoft. It was the perfect tablet, but sadly, it was cancelled.  It was a dual touchscreen tablet that folded in half like a book.  It was pre iPad and before the big tablet boom unfortunately.  However, two developers have made Microsoft’s vision a reality with the iPad.  They have created a program called Taposé that brings the dual touchscreen functionality to the iPad.  Don’t go thinking they will make it fold in half either. 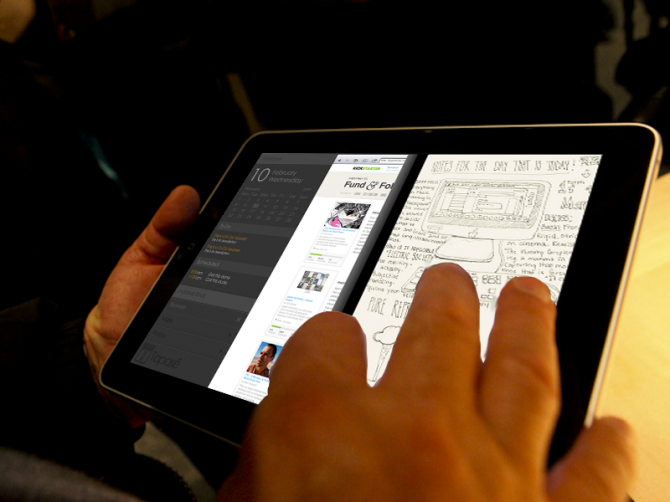 The developers describe the app on their site:

Taposé brings Courier functionality to the iPad. The creativity, productivity, and attractive user interface merged into one outstanding product. The split interface design (similar to the Courier idea) allows users to interact with multiple apps simultaneously in one app – Taposé.

The app brings a new set of “wow” to the iPad itself.  The dual screens allow you to drag and drop between the screens. You can drag an address to put in maps, you can drag a Safari window over.  If you can drag it, you can drop it on your other screen, or taposé.  You can even use the middle separation bar to adjust the size of each side and as a temporary placeholder for images, notes, etc.

If you are so inclined, you can head over to their project page and become a backer. A $10 pledge will get you a copy of Taposé one it’s released for the iPad and will allow the developers to continue their efforts.  Their goal is to have the app released this summer.  You can find their video below: