If you haven’t seen the new push notification format in iOS 5, then this may look a bit unfamiliar to you. CallBar utilizes this new functionality and applies it to your incoming calls. After enabling the tweak, it will show phone calls and facetime calls up at the top of the screen, similar to the notifications, and allows you to accept or decline the call. 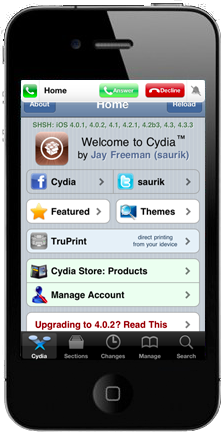 The tweak currently works on iOS 4.X, and is expected to work with iOS 5. However at this time, the developers are saying that you cannot install on iOS 5 because it is still in Beta, but when it is released to the public, CallBar will be updated to work with the new version of iOS. The app has settings to enable the app, to use it at lockscreen, and if you want to use it for phone calls, facetime, or both. You can also set the lock button to decline a call or lock the device.

The tweak is available for $2.99 from Cydia and is ready to download now.