EyeTV app developed by Elgato has certainly been in the headlines recently. Yesterday Apple removed EyeTV from the App Store because it allowed live TV streaming for iPhone 3G. Just now, the EyeTV app has reappeared in the US, UK and German’s App Store. On Yesterday’s removal Elgato issued a statement that said:

However there exists uncertainty regarding the submitted app being the updated one (EyeTV 1.0.1) or the one which enables live TV streaming. 9to5Mac received news from a tipster who said  that the app appears to be version 1.0.0 (which enables live TV streaming). However the tipster also highlighted the possibility of the company not wanting to change the name of the app.

Interestingly the updated EyeTV 1.0.1 has been submitted to the App Store as confirmed by the tipster. So this means only one thing the updated app might be making an appearance on the App store pretty soon. 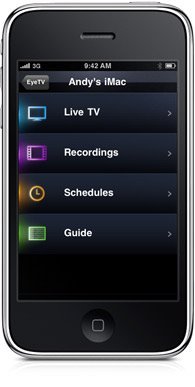