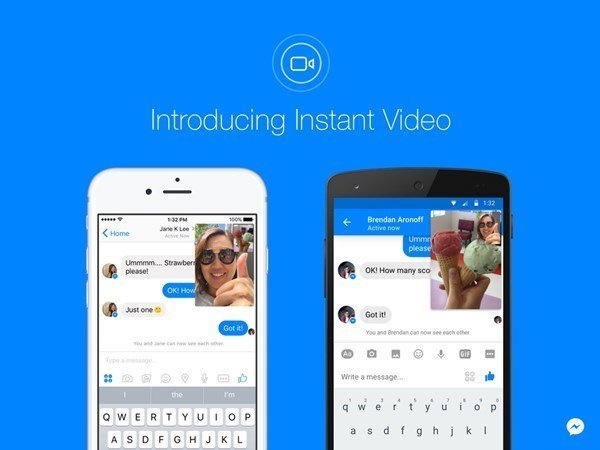 Instant Video is useful in situations where users just want to show something quickly but cannot initiate a full call with sound. Instant video always starts with the volume on mute, which can be enabled if needed. The video floats in a video on top of the conversation, with controls on it to change camera, mute/unmute, full-screen video and accept/hang up call buttons.

Just like Facebook cloned Snapchat Stories to create Instagram Stories, they have copied Snapchat’s video call feature to create Instant Video in Messenger. Snapchat’s implementation differentiated from other video calling applications by making two-way video call optional and letting users instantly stream their video while chatting using text messages, emojis or stickers. The video does not take over the full screen by default which makes it easy to stream and watch video and message at the same time.

If I were Snapchat, I would be really upset to see Facebook just stealing features from my app, one by one. These are not just normal features but innovative ones that only Snapchat came up with. This is not the first time that Facebook has done this to a competitor. A number of features that we see now on Facebook have been ‘borrowed’ from Twitter in the past. Perhaps, if Facebook can’t buy a company like they could with Instagram and WhatsApp, they find it better to just copy their features.Facebook is rolling out Instant Video gradually to users on iOS and Android. They have not announced whether it will be released for the web version of Messenger or not.

Facebook is rolling out Instant Video gradually to users on iOS and Android. They have not announced whether it will be released for the web version of Messenger or not.