Facebook App for iPhone has been lagging in updates ever since Joe Hewitt left charge. Only recently did we see an update that lets you watch Facebook videos on iPhone. You would have expected Facebook to be the first to support iOS 4 when it’s launched, but they weren’t. Better late than never though, Facebook App has been updated to version 3.1.4 with support for iOS 4 Fast App Switching and high resolution icons to look pretty on the iPhone 4 Retina Display. 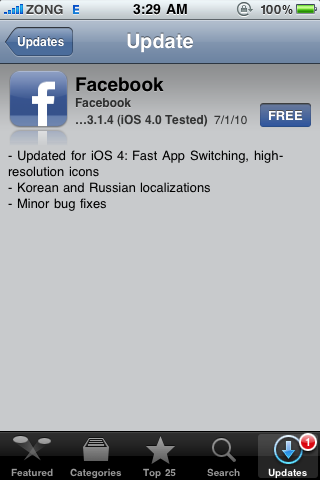 Also included are some bug fixes, the weird icon shadows that were appearing before in iOS 4 are now gone. Korean and Russian language support has also been added.

You should see the update pop up in the App Store. If for some reason, you don’t have Facebook app on your iPhone/iPod Touch or iPad, follow the link below.