Less than two weeks after Facebook’s update for their iOS app, version 5.1, which brought new features like photo filters and multi-photo uploads, the social media giant has released another update for bringing it to version 5.2. The latest update fixes many bugs and brings a much request feature to the mobile app i.e. the share post button as well as the ability to use emoticons in messages and tagging friends in posts, photos or comments.

The long awaited ability to share posts has now been added in the new update. Just like the Facebook website, the share button allows users to quickly share posts directly from their news feed. It’s weird that Facebook hadn’t included their popular sharing functionality in their mobile apps previously but it’s a much welcome update although, in our testing, it didn’t exactly show on everything we could see in our timeline. Facebook has also improved the sharing functionality by allowing users to easily tag their friends in posts, photos, and comments – again, functionality which existed since long on the main website but just came to the mobile apps. 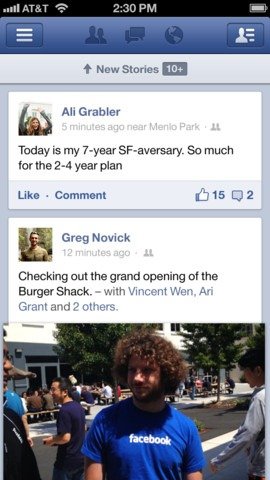 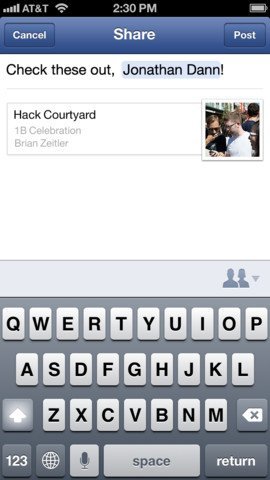 Users can also use different smileys, hearts, and other emoji characters when chatting with friends through Messages. The news feed can also be sorted quickly by either most recent or top stores. Here’s the complete list of changes in the new app:

The latest update for iOS is compatible with all devices running at least iOS 4.3. If you are already using Facebook app on your iPhone, just update it from App Store –> Updates or you can download the latest version from the link below. Similarly, Android users can either check the Play Store for an update or directly go to the link below and manually update.