This has been officially quoted as “an EPIC FAIL from Sony” found in the PlayStation 3 gaming console. Fail0verflow is basically the code name for security exploit that has been discovered in the PS3 system and was revealed today at 27th Chaos Communication Congress (27C3). Hackers named Bushing, Marcan and Sven presented “fail0verflow” to the hackers community explaining how it can overflow the PS3’s bootup via replacing the NOR flash on startup. 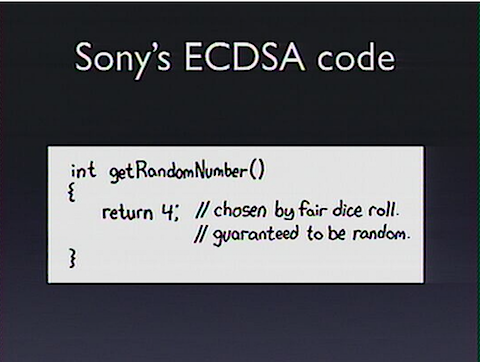 According to the hackers, “PS3 has totally failed in security”. The signing keys are available right inside everyone’s PS3 Console which can allow anyone to sign a bundle and execute it on any retail PS3 system. A live demo of the exploit will be available tomorrow and jailbreak tools will be released to the developers in less than a month.

What all this means is that dongle-less jailbreak should come to PS3 soon by overflowing the bootup NOR flash. Also, the latest PS3 Firmware (v3.55) is completely vulnerable to fail0verflow exploit and a permanent jailbreak solution is on its way pretty soon!

You can visit fail0verFlow official website here and check out their official twitter feed here. Check out a video clip from the congress below: