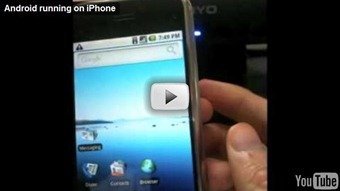 The unthinkable has happened. This guy has managed to run Android on an iPhone 2G! This should make all Linux fans out there extremely happy( as well as Google ). Best thing about this is that the guy can boot into either iPhone OS or Android. While I have no idea why the hell would anyone want to ruin their iPhone by running Android on it, we’re all up for choices though! Check out the video:

This hack only works on iPhone 2G for now. According to the author of this hack, it shouldn’t be much of a problem to port this hack to iPhone 3G and 3GS as well. The pre-built images and sources are available for download here. If you’re a daredevil and give it a shot, let us know how it goes!
[via Gizmodo]