Recently, Android OS was modified to run on the iPhone 2G ( check out our guide on how to install it ). Almost a week ago, it was demoed running on an iPhone 3G as well. Now it appears that it is being hacked to run on the iPod Touch (1st generation) as well without the cellular features such as phone calls/SMS/MMS etc of course. 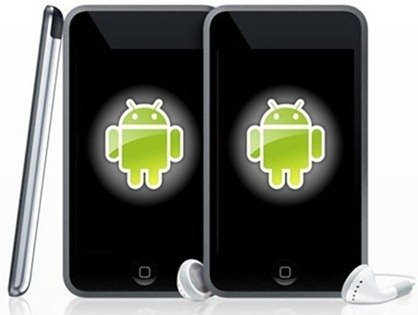 Here’s what planetbeing said on Linux on the iPhone blog:

I am working on some stuff that is slightly more fun. Last night, I brought openiboot for the first-generation iPod touch up to scratch so that it supports all the features the other ports of openiboot support: sound, multitouch and SDIO (for WLAN) are the notable things I had to fix. Earlier today, I figured out how to drive the piezoelectric tweeter on the iPod touch.
Hopefully, we’ll be able to roll out the iPod touch binaries with the 3G binaries and get on with the real work: power management and the little details that will make Android a truly viable alternative on our three early ports.
In the meantime, I hope to find some time to play with the piezoelectric buzzer on the iPod. Two neat projects I think I or some other enterprising person should do with it:

In short, a lot of things such as multitouch, sound and WLAN need some fixing.

If all goes as planned, Android for both iPhone 3G and iPod Touch 1G will be released on the same day when the work is done. Don’t expect the release to be very soon since there seems to be a lot of work remaining before the firmware are stable enough for release.

With Android market share on the rise, having this OS as optional for iPhone and iPod Touch owners will only be a good thing. Froyo anyone?