Android users have been waiting anxiously for Android 2.2 upgrade but Nexus One users were lucky enough to enjoy it for about a month thanks to the leaked build. Froyo was first released with build FRF50 which was followed by FRF72 and now Nexus One users have received the final Android 2.2 Froyo build with a marked FRF83. 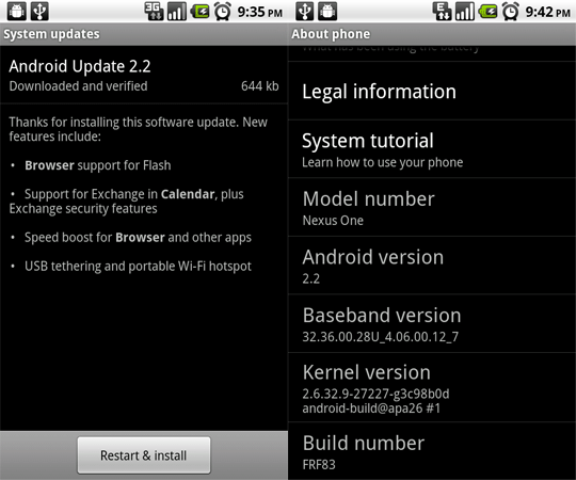 Google released the source code of Android 2.2 Froyo yesterday which meant that the Android phone manufacturers could start work on their upgrades for their phones. And just after that, the new over the air update began hitting Nexus One phones which was the final version of Android 2.2.

Nexus One users can download the OTA from here and install it, but this would only work for those who are currently using FRF50. Apart from this you can upgrade you Nexus One to the latest firmware by checking for it.

Browse to Settings > About phone > System updates and you should receive a notification to download the update.

The update is of 644kb and it would take only a few minutes to install. You may not note any noticeable changes because it is almost the same. So, if you have Nexus One and you have not upgraded it to FRF83 then you should do it now.