Firefox 17 has been made available for download for Windows and Mac users. As usual, the new release comes with many bug fixes, performance enhancements and new features. These include an updated Awesome bar, tab animations, click-to-play plugins and support for Mozilla’s new Social API. Mozilla had just released Firefox 16 last month.

Firefox 17’s new Click-to-Play feature disables all outdated plugins to keep the user secure. This can include plugins such as Flash and Java. In case the user still wants to use the plugin, they have to manually activate it. They’re also shown a link to update the plugin, if an update is available. 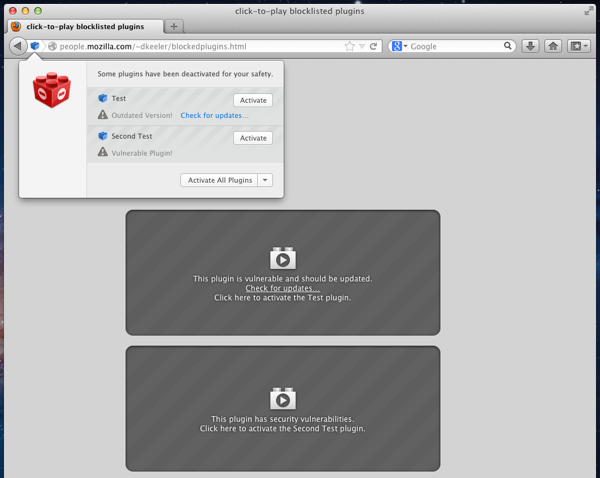 Firefox 17 brings support for a new Social API to allow users to integrate their social networks directly into the browser. For now, only Facebook integration is supported however, with upcoming releases, we might see Twitter integration as well.  To enable it for your Facebook account, visit this link in the browser and click on Turn On button followed by logging in to your account.

Once you have enabled the API, you will be able to send messages, receive notifications and chat with your online friends without having to leave the site you are currently viewing.

The address bar has been updated with larger icons. That seems to be pretty much the only change we’ve noticed with it.

Support for OS X 10.8 Mountain Lion has been added in Firefox 17 but it no longer supports Mac OS X 10.5 Leopard. If you are on Leopard, you can keep using Firefox 16 or earlier versions.

Firefox 17 is available for download for Windows, Mac, Linux and Android