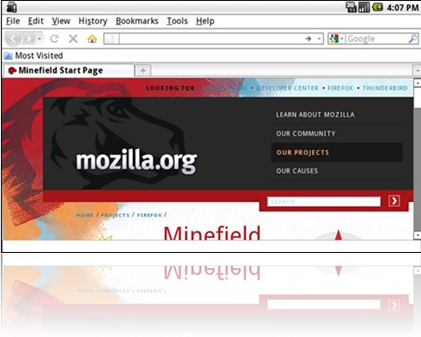 Mozilla have decided to launch Fennec,the mobile version of Firefox for Android platform. Jay Sullivan, the vice president of mobile at Mozilla, has signified that Firefox mobile for Android will launch later in 2010. He hasn’t provided any specific date.

In Mobile World Congress, he explained to TechRadar that “Android is a modern OS, and it’s a great fit with us. It’s the type of platform that has a high affinity with the early adopter, and it’s seen a lot of uptake.”

The development of this version is very challenging because Firefox is based upon C and C++ while Android is based on Java.

“Until recently, Android was Java, but they released Android NDK which uses C/C++ and that is what we program in, so we are now looking at developing Firefox for Android,” said Jay Sullivan, vice president of Mobile for Mozilla.

From the above image, it is clear that the browser version for Android will be using the desktop like UI. The Firefox team had start working on a functional version of Firefox Mobile for Android so its mean Android is getting more attention.

So, this is good news for Android users as they will be getting a lot of new browser choices soon which include Firefox Mobile, SkyFire and Opera.