Apple’s hottest new gadget, the iPad 2 is launching this Friday, March 11th with its brand new looks and much-improved specs. As usual, the big Apple fan base will be getting in line and camping overnight, eager to grab one on the very first day of its launch. To make things easier for you to decide whether you should order online or stand for hours in the waiting line (though it’s totally up to you), we have gathered all the information available regarding the iPad 2 launch in one place.

AllThingsD released a chart last week showing the data plans for iPad 2 from both AT&T and Verizon side by side which you can see in the table below: 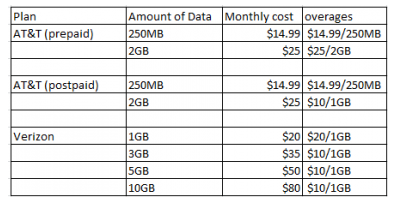 It turns out, the pre-paid offerings of AT&T are the same for iPad 2 as previously for the 1st-gen iPad i.e 250MB/$15 and 2GB/$25. However, now a “postpaid” option is also available which charges overages at a set rate (see table above). On the other hand, Verizon seems more suited for heavy users with offerings of 1GB, 3GB, 5GB, and 10GB data per month.

Now, Apple is happily answering its customers any questions regarding when the online orders will start. Take a look:

As for picking one up from the Apple store, customers can come at 5 p.m. to get one in hand on the launch day. As there will be very long queues on March 11th, the only other option for hardcore enthusiasts will be to stand in line to get their hands on an iPad 2 before the orders go to next week.