Ever since the launch of T-Mobile’s G1 phone, Android has been sold like hotcakes. The Operating System has pretty much ruled the OS market along with iOS and as we speak it continues to grow further on cellular networks. Android 3.0 Honeycomb is the latest Android update mainly for tablets but it is yet to be seen as its release draws nearer and nearer. Having said that, T-Mobile and its freshly announced G-Slate tablet designed by LG leaked several videos that show off Google’s new tablet OS.

With revamped applications along with other great new features, Honeycomb has been decked out in a holographic UI. Scrollable widget support and some special 3D transition effects take the OS to the next level. YouTube app has gone extensive revamp and quite rightly, the app is in 3D in every possible way, and not in parts or little patches. Android will also get a taste of video chat client powered by Gtalk for the first time. Whether it is going to be Gtalk itself or something else has been planned, only time will tell. But the idea is truly an impressive one.

Moreover, user panels that have been installed show their own particular set of information; for instance, the Gmail application is displayed on the left and when email is selected by the user, the application would process in a separate new window instead of changing the entire page. This, in turn, allows users to have access to their inbox while they are in the midst of reading an email. Surely, this will really help the cause of users as they would be able to get content faster than ever.

The induction of scrollable widgets is definitely a nice addition. Once again, the Gmail widget is a boon- a very smart induction this. The widgets can be found at the bottom of the screen and all in all, the set up slightly resembles that of MIUI custom ROM. Furthermore, we await more on Honeycomb in the days to come but what we have seen so far of this new OS has been no less than impressive. 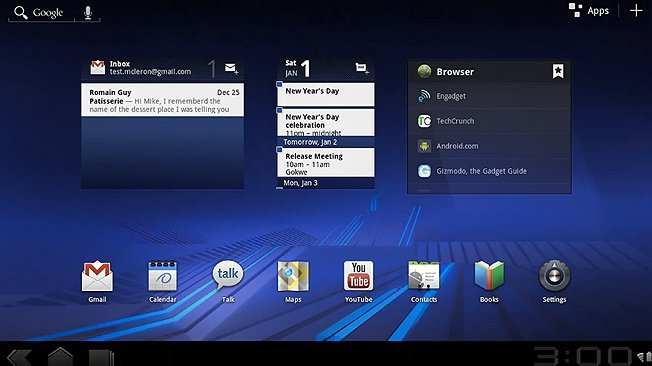