The overhyped Google’s new social network that goes by the name of Google+ is going to make a debut on the iOS with an official Google+ app. Though the browser version of Google+ works just fine but having a native app with features like Push notifications, is always a big plus. Also, an android app of Google+ is already available in the Android Market. We are not sure either its an iPhone, iPod only app or an iPad optimized universal binary, but we’re sure to find out as soon as it hits the App Store probably within this week. 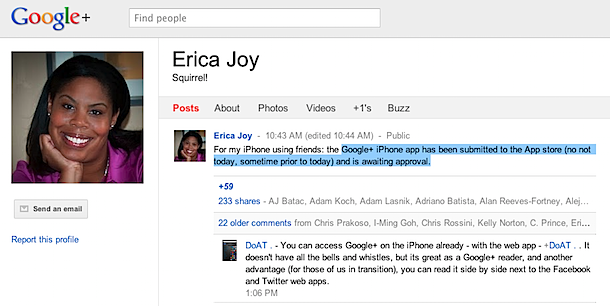 “The Google+ iPhone app has been submitted to the App Store (no not today, sometime prior to today) and is awaiting approval.”

Currently, Google+ is available only as an invite only beta and lets you signup once you receive an invite from a registered Google+ user. We’ve already posted a loop hole in Google+ invite system which can get you an invite to the private beta right now. As to how far the network can live up to all the hype, only time will tell. Personally, I’m not quite impressed with the Google Circles+ thing, are you?

At its most recent online event, Apple launched the next generation of smartwatch, Apple Watch…