According to Blogstorm and TheNextWeb, Google has started testing a new feature that enables you to preview a page in your search results. This can be done by hovering over the magnifying glass alongside a search result. Tweets have surfaced from users around the world having experienced the new feature. No official word from Google yet, nobody knows if this is a testing phase, or if Google is rolling out the new feature to all users. 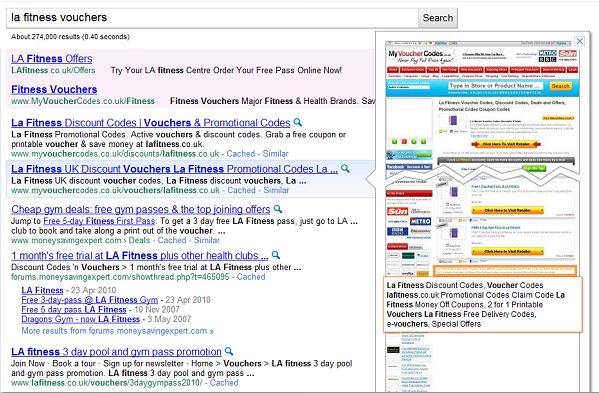 The preview includes the full page with a break if the page is too long. It also highlights your initial search query in the preview so you can have an idea where it is on the page. Clicking anywhere on the preview will take you to the page. Blogstorm has also noticed that Google is showing multiple results from the same site. Its been confirmed that this is not an extension and an actual feature. If Google is actually rolling out this new feature for users worldwide, then this small change is really going to make Googling much easier. Having to click on individual links and opening them in numerous separate tabs only to realize that the information was not useful. It’s happened to you to, hasn’t it? [Via Mashable]