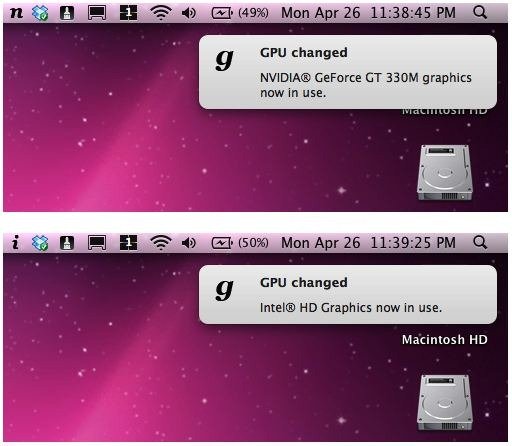 When using a laptop under standard conditions, such as using the Internet for a while or working on text documents, it’s crucial that we get the most battery time out of our laptop. The new MacBook Pro with Intel core i5 and core i7 processors doesn’t allow to manually switch graphics and officially there’s no solution to switch between the GeForce GT 330M chip or the Intel HD Graphics chip, but gfxCardStatus solves the problem. It’s an unofficial third party open-source menu bar app which allows easy switching between the two. The features of the app are as follows:

We highly recommend that you give gfxCardStatus a shot, it’s a really easy solution for switching graphics and it works flawlessly. You can download it from here. And keep in mind this will work only on the current generation of MacBook Pros with Intel Core i5 and i7 with GeForce GT 330M graphics chip.