Microsoft is trying hard to get developers excited for Windows Marketplace, while at the same time taking shots at the competition, namely Apple’s App Store. While most iPhone users are fond of the $0.99 Fart apps and the likes, Microsoft thinks such apps are worth rejecting. This recently posted video on the Windows Mobile Dev Youtube channel really mocks the hell out of such applications while labeling them as rejects in the top secret Microsoft Apps lab.

Several mock applications are demoed by the two engineers in the secret Microsoft lab, that serve little to no purpose, except for being a waste of money. Some of them actually resemble popular apps already present in the App Store, such as ‘The Great Moustaches of the World’, which is similar to MouthOff for iPhone. Although the latter is an entertaining app, but demoing a similar mock app as a reject shows that Microsoft wants developers to create more serious and productive apps and not ones that resemble the sounds that a person’s body would make under dire conditions.

While this video shouldn’t be taken seriously, it’s definitely worth a watch if you are taking part in The Race to Market Challenge, details for which are as following: 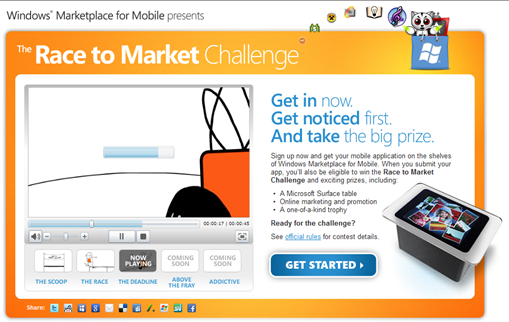 Windows Mobile 6.5 might not be the best mobile OS ever, but it’s nice to see Microsoft pushing hard to get more and more developers on board for Windows Marketplace.