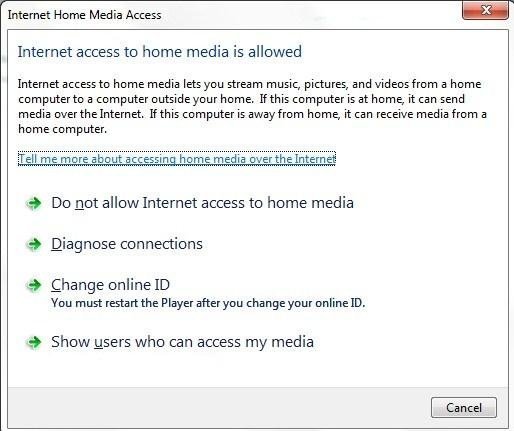 While Window 7 feature set might have been set in stone before being released as a Beta to the public, there are still a lot of new features being uncovered in the leaked pre-RC/RC build. Internet Home Media Access is another new gem uncovered from Windows 7 build 7048. It’s a new feature in Windows Media Player which lets you share your home media with anyone over the Internet or lets you access your home media from anywhere online. It seems similar to how Windows Home Server can let you access your files from anywhere via the Web, but this seems to be restricted to media files only. Users can be granted access to your media using their Windows Live ID.

This feature along with incremental backups and Home Group have actually made their way from Windows Home Server to Windows 7. It’s great to see that Microsoft is actually making such options accessible to every Windows user instead of just Home Server ones, making Windows 7 seem more value packed than Vista already. I’m not sure yet if this feature is just tied with Windows Media Player or just certain SKU’s of Windows 7. But I can already see many users happy with it and many other software vendors who provided such remote media access features having their hearts broken.

Any guesses on whether Internet media streaming to Windows Mobile 6.5 devices from Windows 7 would be available down the road? I, for one, wouldn’t be surprised.