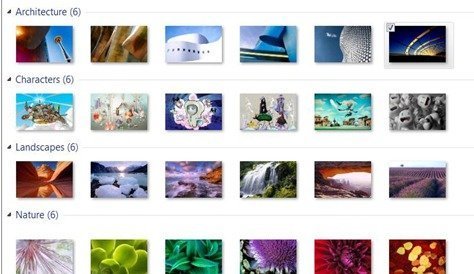 Windows 7 wallpapers have been increasing in quality with every new build release. Build 7057 is no exception because it has some of the most amazing wallpapers you’ll see. Here are the new wallpapers and pictures from this build. Enjoy!

Windows 7 is Microsoft’s latest operating system which aims at fixing everything that was wrong with Vista. Microsoft is trying to under promise and over deliver with this release and working on improving performance, reducing battery and resource usage and slimming down the OS to make it lean and faster. Windows Vista was an ambitious project, which was first born as Longhorn. Longhorn had tons of features which never saw the light of the day but Vista was a quick change in direction to get the latest version of Windows out of the door at that time.

A lot of users chose to stay with Windows XP as Windows Vista, despite a lot of new features, hardware accelerated UI called Aero and much more, couldn’t provide as much value for money and hardware as XP was still giving.

Despite being in its development phases, Windows 7 is shaping up to be a very good operating system. There have been no increases in system requirements, which is a first for any Windows desktop operating system! We are certainly excited with how the user interface has also been cleaned up. User account control ( UAC ) has been tamed to show up less often now. Boot times have also been increased tremendously as well as many other nuances that Vista had brought with itself.

While Apple has been charging for their ads, at the cost of Windows Vista, we hope that Microsoft indeed delivers with Windows 7 to ensure that the competition stays healthy in the market. Until Windows 7 releases, you can download these wallpapers to enjoy a taste of what’s to come.