Excellent news for folks hanging on to older iOS 4.x versions because of jailbreak. A new bootrom exploit has been found by Chronic Dev Team member Pod2g as confirmed by MuscleNerd and cpich3g on Twitter: 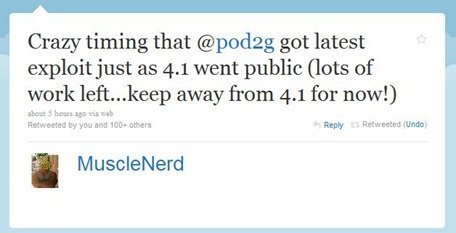 This means that it’s possible that we’ll get a jailbreak tool very soon for all iOS devices which includes the new iPhone 4 and iPod Touch 4. The decryption keys have been posted by Pod2g and he has confirmed on Twitter that it works for iOS 4.1 on iPhone 4 and iPod Touch 4. Over at the Chronic Dev Team blog, a blog post with just the decryption keys is available with more information to be coming soon.

What we can tell you already is that a bootrom exploit requires a hardware revision to be fixed and not just an iOS update by Apple. So you can be assured that once tools have been made to jailbreak current generation iOS 4.1 devices, you’ll have a happy jailbreak journey with them, until Apple tries to patch up the new exploit. And the can and mouse game will go on and on. You get the idea.

We’re anxious to find out more!

Update: This exploit also works on the iPad bootrom!

P.S. this still doesn’t mean that you should update to iOS 4.1 if you want to preserve your jailbreak/unlock.