Apple has rolled out beta 5 for iOS 8.2 for iPhone, iPad and iPod Touch. The latest beta build of iOS 8.2 brings over bugs fixes and improvements as updates but no new features have been discovered so far. 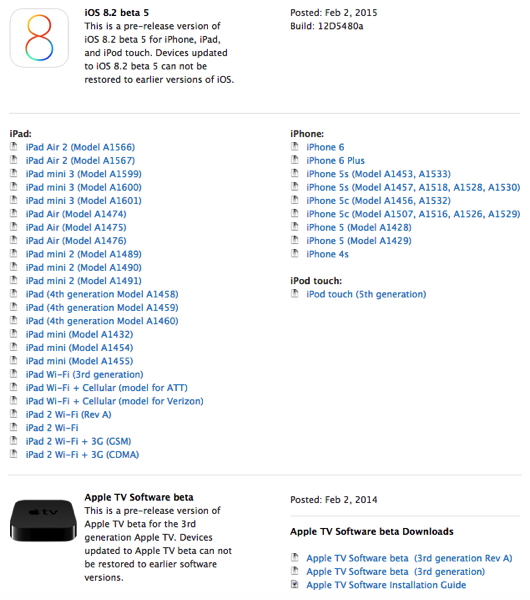 The new beta 5 iOS 8.2 release is marked as build 12D5480a for iOS devices and Apple TV. The number of iOS devices supported by this update is huge – starting form iPhone 4S, iPad 2 and iPad Mini to latest models of these device line ups. iPod touch 5th generation is the only lonely device in its line up to receive iOS 8.2 compatibility. Apple TV 3rd generation is the only model to get the latest update too.

iOS 8.2 is mainly focused on bringing support for Apple Watch to iOS, along with much needed bug fixes to the OS. As Apple Watch was confirmed by Tim Cook, CEO of Apple, to be available publicly from April, iOS 8.2’s GM build would be release before that.

If you are a developer, you can go to Apple Developer Center and download the update right now. If your device was already running a previous beta build for iOS 8.2, go to Settings > General > Software Update to get the new build for download.