Apple has rolled out the first beta of iOS 8.3 for iPhone, iPad, and iPod Touch. The download is available for registered iOS developer program members. 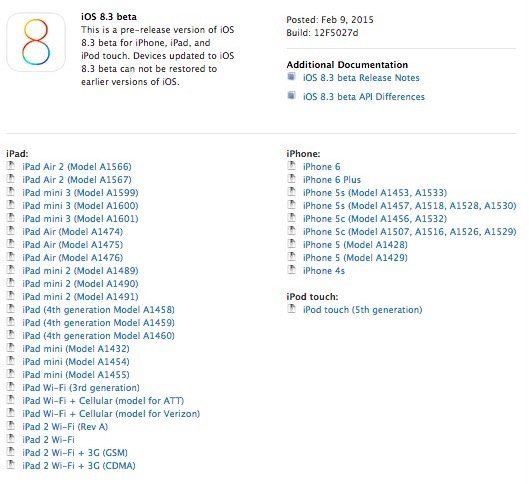 The new iOS 8.3 beta build 12F5027d brings in bug fixes and performance improvements, along with new features such as wireless carplay support and more. Apple had recently released a new beta of iOS 8.2 as well so this is one of the few releases available to install on iOS devices nowadays, along with iOS 8.1, which is the current non-beta build.
Here’s the complete list of new findings in iOS 8.3 via Macrumors forum:
New Features / Updates to existing functionality:
– Wireless CarPlay support
– Google login for 2 factored accounts
– New emoji layout, with single-page horizontal scrolling with category jumps
– It removes the ‘beta’ label on iCloud Photo Library
– Apple Pay gains support for the China UnionPay network
– Moved iTunes Store and App Store password settings to under the username in iTunes Store and App Store. (Some strings not yet translated)
– Apple Watch Settings app has been added to the iOS 8.3 simulator
– Additional carriers now have LTE/3G/2G voice & data toggle
– LTE/wifi calling location service added to system services

– When backing up manually in iTunes the iPhone screen turns white with a progress bar until backup is complete. (possibly Encrypted Backups only)

– Deleting an iCloud tab in Safari is now fixed

– Vibrate for mail is finally fixed, now it’s one vibrate as it should be, not a double.

It’s interesting to note that there is no new iOS 8.3 beta release for Apple TV to concide with this one.
If you are an iOS developer, go ahead and give it a try by downloading it from Apple Developer Website.